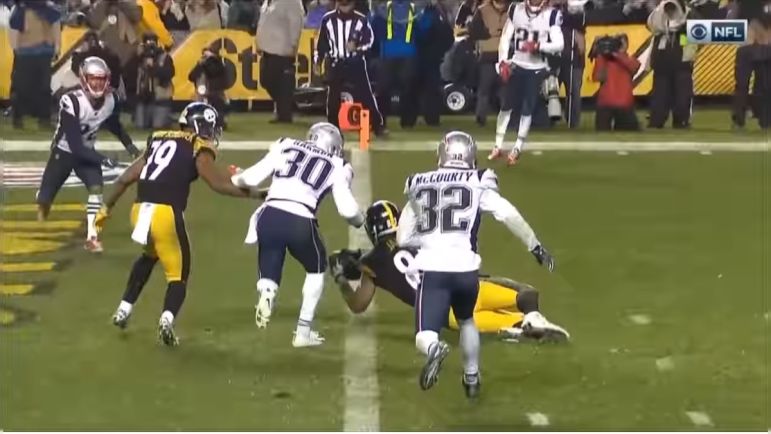 Ben Roethlisberger would prefer to forget the insanity that was the Jesse James “no-catch” play. In a back-breaking loss to the New England Patriots that felt like a win, officials ruled TE Jesse James never secured the football on the goal line, wiping out a would-be game-leading and likely game-winning touchdown. Instead, the Steelers ended the game on an interception.

On the latest episode of his Footbalhin’ podcast, Roethlisberger admitted he’s tried to forget that moment. In talking about Sunday’s loss against the Philadelphia Eagles, he was asked what he remembers about that play.

“Sometimes those bad memories just get washed out,” Roethlisberger said. “So I don’t really remember.”

A long JuJu Smith-Schuster catch-and-run set the Steelers up at the Patriots’ 10-yard line. Down three points with 34 seconds left, Roethlisberger hit James over the middle, who dove and stretched over the goal line for what appeared to be a touchdown. Officials ruled it a touchdown but overturned it on review, a stunning call few (who weren’t Patriots’ fans) agreed with. Two plays later, Roethlisberger’s pass was picked by S Duron Harmon, and the game was over.

Always the underdog and rarely the winner, Roethlisberger chalked the game up to facing the beast who is New England.

“It was the Patriots. I don’t know what to say.”

Roethlisberger went on to explain he thought after a review, the refs would confirm the call or rule that it stood. But they didn’t and the Steelers would-be upset over the Patriots didn’t happen.

It remains one of the most controversial plays not just in recent Steelers’ history but NFL history, right up there with moments like the Fail Mary and Dez Bryant catch/no catch. While a painful loss, Steelers’ fans today would probably enjoy a highly competitive, exciting, and entertaining football game. Right now, they’re playing non-competitive football that doesn’t even go down to the wire for moments like James’ catch/no-catch.

Roethlisberger may have forgotten the moment, but 99% of Steelers Nation hasn’t. Not one to forgive or forget.

Check out Roethlisberger’s latest episode by clicking the link below.