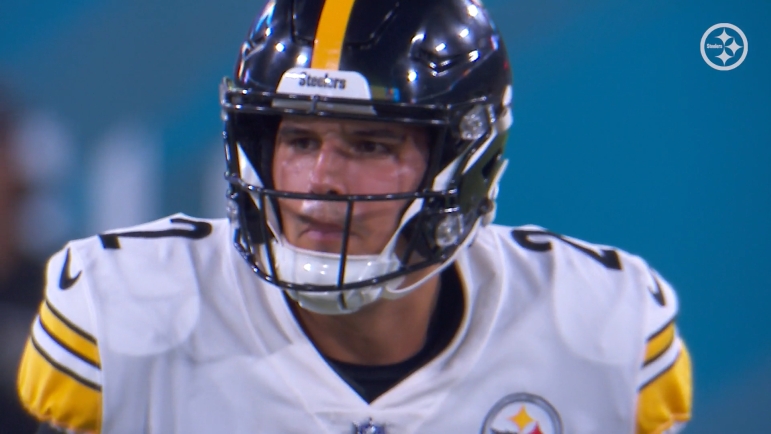 The 2022 NFL Draft deadline is tomorrow at 4 PM/EST. While it’s not certain if the Pittsburgh Steelers will make any moves, QB Mason Rudolph has expressed no desire to leave the team. Speaking to reporters Monday as shared by 93.7 The Fan, Rudolph said he has not asked the team for a trade.

#Steelers Mason Rudolph said he has not requested a trade 'my focus is to do the best I can to be a good teammate, stay sharp whether I get an opportunity here or somewhere else'

Rudolph has served as the team’s #3 quarterback all season long and has yet to dress for a game, let alone play a snap. He’s sat behind Kenny Pickett and Mitch Trubisky since the regular season began, a step backwards after previously serving as the team’s #2 QB behind Ben Roethlisberger the past several seasons.

Rudolph entered the spring as the team’s #2 quarterback, running ahead of Pickett. But Pickett’s strong summer saw him pass Rudolph on the depth chart and make Rudolph a weekly inactive.

While he hasn’t asked for a trade, Rudolph admitted he’s well aware of tomorrow’s deadline.

#Steelers Rudolph consider being traded?
“I think about it for sure, I haven’t heard anything. I think typically if something were serious or going to happen you would hear something from the team or the rumor mill. We’ll see, I don’t anticipate it. Crazier things have happened.”

“I think about it for sure. I haven’t heard anything.”

As The Fan’s tweet notes, Rudolph says he doesn’t “anticipate” being traded. Request or not, it’s a situation Rudolph has no control over. Pittsburgh probably had the opportunity to move Rudolph in the summer, but the team’s conservative and protective nature led it to carry three quarterbacks, giving itself options and injury protection. That calculation hasn’t changed now, so it’s doubtful Rudolph will be dealt. Pittsburgh being 2-6 may slightly change the equation, and they’ll at least listen to offers. If they get one too good to pass up, they may deal Rudolph. Still, it’s hard to see him command more than a late Day 3, perhaps conditional, draft pick, giving the Steelers small incentives to make a move.

While it’s most likely the Steelers stand pat tomorrow, not buying or selling, other trade possibilities include QB Mitch Trubisky and WR Chase Claypool. Claypool is the most logical name to be moved. A cheap contract with a rookie deal that runs through 2023, he’s reportedly drawn plenty of interest from receiver-needy teams. The Green Bay Packers have been connected to him, but it’s unknown how serious those talks have gotten. Reportedly, the Steelers are asking for a high price on Claypool, making the odds likely he remains in Pittsburgh past tomorrow’s deadline.

The NFL has seen more trades this year than in past seasons and Rudolph, the Steelers, and the league will have their answers by 4 PM/EST Tuesday.