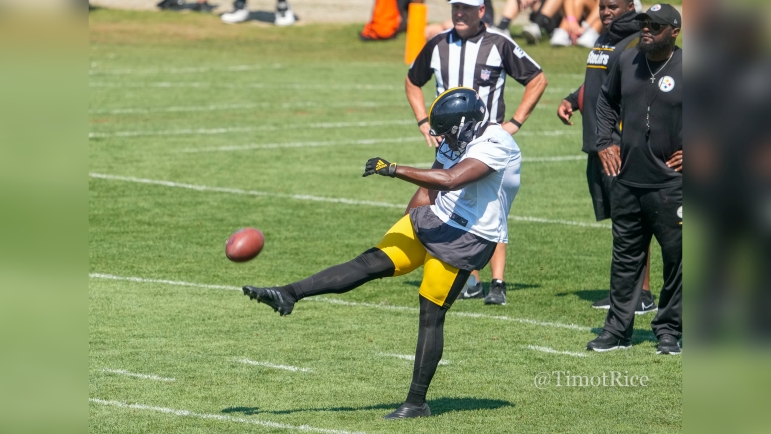 Here’s a chart of the latest rankings.

Week 5 Punter Rankings:#ChiefsKingdom Tommy Townsend maintains his spot on top while #Titans Ryan Stonehouse and #RaiderNation AJ Cole round out the top 3 pic.twitter.com/wze4qrNBL7

Using more traditional statistics, Harvin carries a 45.1-yard average and 41.0-yard net through five games. Those numbers hardly look any better, his average ranking 25th while his net is tied 19th in the league. In some fairness, net is a coverage stat, not one solely on the punter, but neither figure is where the Steelers need them to be.

So far, his numbers are an improvement on what he did as a rookie, his average increasing by nearly three yards and his net is up exactly three yards compared to a year ago. But numbers tend to drop when the weather turns cold and ugly, and Harvin is struggling to punt in relatively good conditions. Sunday’s game against Buffalo was more challenging due to the win, but Harvin still had a 26-yard punt that did little for field position.

After a difficult rookie season on and off the field, Harvin was shown a full vote of confidence this summer, the Steelers having very little competition for him. He responded with a solid training camp but has struggled to carry that success over into games, preseason or regular season action. For an offense and defense that needs special teams to flip the field, that hasn’t happened. Though a broad stat that takes into consideration many factors, opponents have an average drive start at their own 30.5, putting Pittsburgh in the bottom five of that category. (Update: PFR just updated its numbers and the average opponent start is their own 31.2, 31st overall, meaning opponents have the second-best field position against the Steelers).

It’s worth pointing out Harvin dealt with a hip injury coming out of the Cleveland Browns game, but hasn’t missed a game much less a practice. Excuses are running thin for Harvin, who hasn’t shown enough consistency two years into his career. Punters aren’t afforded much time to figure things out either, and it’s fair to wonder if the Steelers will make a change later this year if his play doesn’t improve.

The only player he finishes ahead of in the rankings is veteran Andy Lee, the 40-year old veteran who began punting when Harvin was just six years old. The top punter in the league goes to Kansas City’s Tommy Townsend, who leads the league in net average (48.7). Tennessee’s Ryan Stonehouse is #1 in average at a whopping 54.9 yards per punt.