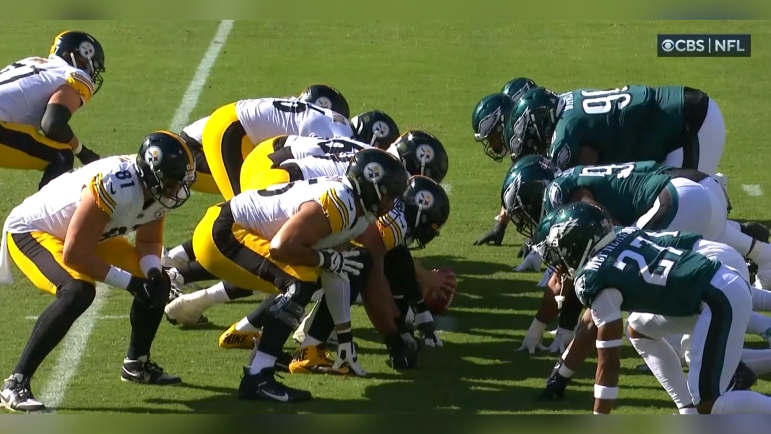 Well, that was a rather ugly one.

What a way to head into the bye week for the Pittsburgh Steelers, dropping a frustrating — at times embarrassing — 35-13 decision to the Philadelphia Eagles Sunday inside Lincoln Financial Field in Philadelphia.

The defense had no answer for Jalen Hurts and A.J. Brown, couldn’t stop the run when the Eagles went to the ground, and generally couldn’t do much of anything offensively as Kenny Pickett turned the football over twice, missed some throws and couldn’t consistently move the football.

That doesn’t even mention the poor running game once again, though Najee Harris picked it up late, and Jaylen Warren had some impressive runs. It just didn’t matter though behind an offensive line that took a massive step backwards in Week 8 against a stout Eagles defense.

Let’s get to some grades and head into the bye week.

After throwing two back-breaking interceptions late in the loss to the Miami Dolphins in Week 7, rookie quarterback Kenny Pickett didn’t quite have the bounce back performance many envision in Week 8 agains the Eagles.

On the day, Pickett finished with 25-of-38 for just 191 yards, threw a late interception, fumbled a ball in the pocket, and just generally wasn’t very good overall. He didn’t see the blitz well on the day, took a lot of shots in the pocket from rushers he didn’t see until the last minute, and those ball security issues continue to be a real problem for him.

He’s also just not pushing the football down the field. Against the Eagles, he averaged 5.0 yards per completion. There’s just no way that’s good enough anywhere. This offense as a whole is a mess, but they didn’t get much from the quarterback on the afternoon.

Granted, he used his legs a bit more and added 37 yards on seven attempts, which was good to see, but he took six sacks, held onto the football too long at times, and missed some throws when they were there. It was another display of real growing pains, but better to have them happen now than later on in his career in the black and gold.

Prior to a few carries late in the game, Najee Harris appears broken as a running back. Not physically, but mentally.

He’s dancing far too much and isn’t using his size and strength to his advantage. He caught a short check down from Pickett with just one defender to beat and needing three yards to move the chains. Instead, he didn’t gain a single yard and was tackled by three defenders because he danced far too much in space.

He seemed to receive a talking to from Mike Tomlin and running backs coach Eddie Faulkner because after that play he came out and ran hard downhill and was decisive.

Problem is, backup running back Jaylen Warren already is that and outperformed Harris on the day. Warren exploded downhill on every touch, forced defenders to miss in space and really ran hard behind his pads. We’ll see what happens at the RB position moving forward, as far as reps are concerned, but after Sunday’s game it’s quite clear which running back is playing better than the other.

Standout rookie wide receiver George Pickens was targeted just three times on the afternoon. He made a play down the field but the play was not challenged in frustrating fashion by the coaching staff, which would have been the longest play of the day for the Steelers.

Chase Claypool led all Steelers receivers with four catches for 45 yards on the afternoon, including an impressive 25-yard catch and run through contact, breaking multiple tackles to move the chains. He was targeted six times in the loss and was generally open throughout the game.

Outside of the nice day through the air for Claypool, he threw a key 1-yard touchdown pass to fullback Derek Watt on the trick play on fourth and goal, resulting in the lone Steelers touchdown of the day.

Diontae Johnson finished with five catches for 35 yards. He did draw one pass interference call in the loss, but he was really bottled up throughout the afternoon by a good Philadelphia secondary. The group just didn’t get open enough, and didn’t make enough plays.

Another week, another strong showing through the air for Pat Freiermuth.

When it comes to Freiermuth, it feels like the Steelers are starting to figure out how best to use their top tight end, pushing down the middle of the field in the passing game.

Freiermuth, along with Zach Gentry, continues to leave much to be desired though as end of the line blockers. They’re not helping much in the run game.

Coming into the matchup with the Eagles, it was expected to be a bit of a struggle for the Steelers offensive line against the Eagles’ great defensive front.

It turned out to be a bit worse than even the largest skeptics believed.

He didn’t have much time to make throws down the field as the Steelers allowed far too much pressure against Pickett. In the run game, the Steelers didn’t generate much until the fourth quarter, finishing with a total 144 yards on 24 carries in the loss. Jaylen Warren ripped off a 19-yard run in the fourth quarter and Harris added an 18-yarder in the third quarter, but much of the damage came on a third and long draw play by Warren and some scrambles by Pickett.

After taking a bit of a step forward in recent weeks, Sunday’s performance was a massive step backwards for the black and gold in the trenches. Add in the penalties and it was a disastrous day for the Steelers up front.

Without Larry Ogunjobi, the Steelers were down a key player up front defensively against the Eagles’ RPO, and it showed.

While Cameron Heyward had a strong game, recording a sack and making some plays against the run, it wasn’t enough for the Steelers as the Eagles rushed for 111 yards and a touchdown on Sunday. Miles Sanders carved up the Steelers defense in the second half, allowing the Eagles to keep firing on all cylinders.

Montravius Adams had a silly offsides penalty for being lined up in the neutral zone while directly over the football, Isaiahh Loudermilk was most non-existent, and the group just didn’t get off blocks well. It was nice to see Carlos Davis pick up his first sack of the season though, working off a block to track down Jalen Hurts.

Outside of a strong showing from Malik Reed, this group was really poor on Sunday.

Reed finished with four tackles, a sack, a pass breakup and a key pressure to force an incompletion. It was easily his best performance as a Steeler and came against a very good tackle in Lane Johnson.

Opposite him, Alex Highsmith was almost non-existent against left tackle Jordan Mailata. While he had four tackles and a tackle for loss against the run, he didn’t generate anything from a pass rush perspective.

Inside, Myles Jack, Devin Bush and Robert Spillane were really poor. Jack and Bush were slow to get off blocks in the run game and didn’t make any sort of play on the day. Spillane was used mostly in coverage and was picked on by tight end Dallas Goedert.

One week after dropping four interceptions in a loss, the Steelers secondary blew a coverage on an explosive touchdown from the Eagles and were carved up by A.J. Brown, resulting in Ahkello Witherspoon being benched.

Minkah Fitzpatrick was beat deep on the Eagles’ first touchdown of the game, failing to make a play on the ball, Witherspoon was then beaten on the next two, and Terrell Edmunds blew the coverage on Zach Pascal’s long touchdown.

Cameron Sutton was the Steelers’ best cover corner on the day, but that’s not saying much. The group also missed tackles in space and gave up far too much room in coverage throughout the afternoon.

Edmunds did have a nice play deep in coverage on Brown in the second half, but it was too little, too late.

Without Chris Boswell, the Steelers had to bring Nick Sciba for the game against the Eagles. The former UDFA kicker and all-time leading scorer in NCAA history at Wake Forest drilled two field goals on the day, and an extra point. He was fine overall handling the kicking duties.

That said, he did have a kickoff go out of bounds in the first half, giving the Eagles great field position offensively.

Punter Pressley Harvin had some good punts, but he also mixed in a 38-yarder, showing off that inconsistency that is so maddening with him.

The Steelers also had an illegal formation penalty on a kickoff, which is just mind-blowing.

It was nice to see Steven Sims make an impact in the return game again. He had a nice punt return on the afternoon, picking up 10 yards and also had a 27-yard kick return. He’s making an impact in that area for sure.

I also loved the fake punt call to Marcus Allen by the Steelers when the game was relatively close. I like that aggressiveness. Need more of it.