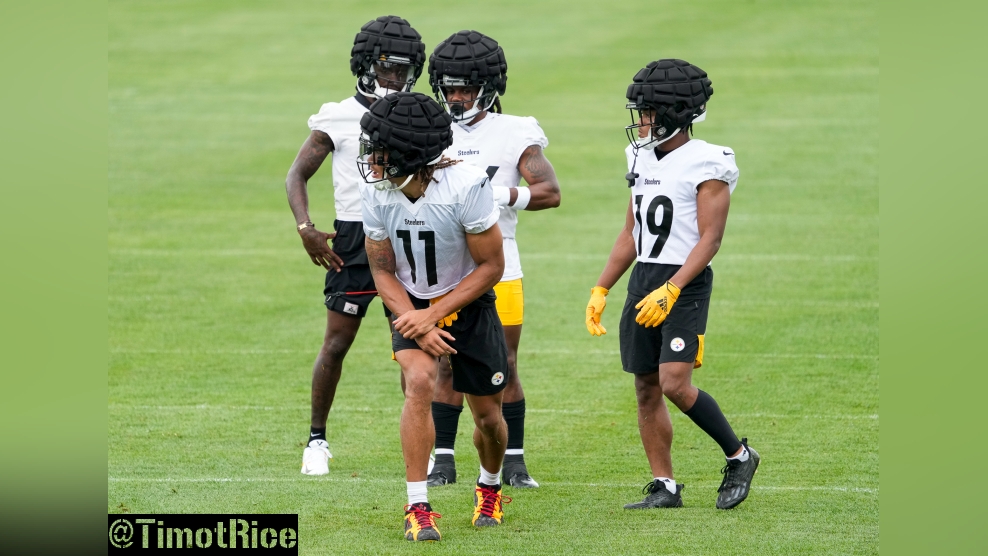 In line with the rest of the offense, the Pittsburgh Steelers’ receiving core is not living up to expectations so far this season. This is a receiving core that the team invested two second-round picks in with George Pickens and Chase Claypool, as well as a multi-year contract extension this past offseason with Diontae Johnson. While all three have shown flashes, consistency has been a problem. As such, Marcus Mosher of Pro Football Focus ranked this receiving core at 17th in a Wednesday article.

“This is one of the most physically gifted wide receiver corps in the league,” Mosher said in reference to his ranking of the team’s receiving core. “But it lacks consistency. Johnson continues to struggle with drops, and Claypool can’t be relied on to be in the right spot at the right time. The Steelers’ best receiver this season has been Pickens, but he is still a rookie and has a relatively limited route tree. This unit has to start playing more consistently to be considered a top-10 unit, although the ceiling is incredibly high.”

Indeed, this receiving core possesses the physical talents to be great. George Pickens and Chase Claypool have a lethal combination of height and speed. They both run a sub-4.5 second 40 yard dash, and Pickens is in the 86th percentile for height, while Claypool is in the 91st percentile. Meanwhile, Johnson is coming off a 1,000 yard season, and is among the better route runners in the league.

That said, each of these three receivers have had their own struggles to keep them from achieving their potential and contributing to this team’s offense. While Mosher is right that Johnson struggles with drops, he only has two on the season according to fantasy pros, indicating a larger problem with his lack of production.

On the other hand, Claypool’s struggles stem from a variety of issues. As Mosher said, there are times where he is unreliable. A key example of this is him tripping on a go-route to lead to a Kenny Pickett interception. Claypool, who recently moved to the slot, did show flashes against the Tampa Bay Buccaneers with quarterback Mitchell Trubisky. Pickens’ struggles are more understandable given that he is a rookie that has played with two quarterbacks. His chemistry with Pickett, though inconsistent, is unquestionable.

Mosher went on to point out several key stats to further justify his ranking:

Of the three top receivers, Johnson is the only one without a 90+ yard game, despite having the most targets on the team by a wide margin. The five interceptions are an ugly stat, and likely stem from more than a few factors. After all, both Johnson and Claypool are adjusting to playing without Ben Roethlisberger, and chemistry takes a long time to build. As for Pickens, this high average depth of target, while promising, may also speak to his relatively limited route tree that Mosher pointed out above.

There might not be anything more painful to watch as a fan than underutilized talent and potential. The blame for this is not simple, and likely stems from many contributing issues. On the bright side, this receiving core appears to have its starting quarterback for the remainder of the season in Pickett, who it will have more time to develop chemistry with. At the very least, there is nowhere to go but up after the team’s recent offensive outing against the Miami Dolphins.