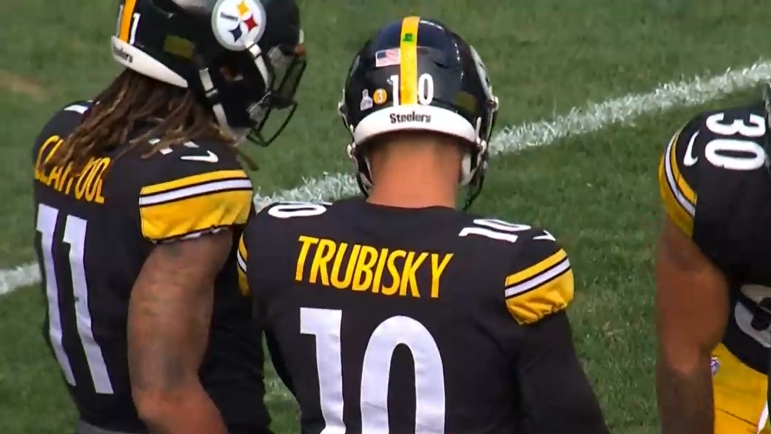 It was a deflating feeling watching rookie quarterback Kenny Pickett walk slowly off the field at Acrisure Stadium against the Tampa Bay Buccaneers in the third quarter after a hard hit from Devin White on a deep shot to Diontae Johnson that was ultimately completed but called back due to a holding on left guard Kevin Dotson.

Pickett, who was having an up-and-down day, was slow to get up after his head hit the turf, resulting in him coming out of the game and entering concussion protocol, which he never returned from Sunday against the Buccaneers.

That forced backup quarterback Mitch Trubisky back into the lineup for the first time since the loss to the New York Jets in Week 4. Things got off to a slow start for the offense with a new quarterback in, but Trubisky responded in a big way, leading the Steelers on a scoring drive, finding Connor Heyward for a 45-yard gain and later hitting Chase Claypool for a six-yard touchdown.

Following a Tampa Bay scoring drive, Trubisky and the Steelers then leaned heavily into the four-minute offense, marching the football right down the field to kill the clock and win the game in improbable fashion.

On the day, Trubisky finished 9-of-12 for 144 yards and the touchdown to Claypool, adding an important nine-yard run on the final drive of the game that moved the chains and drained the clock.

After the win, teammate and fellow captain Najee Harris praised Trubisky for staring down the adversity and stepping up in a major way for the Steelers, according to a tweet from 93.7 The Fan.

“Adversity comes with the sport, no one wants to have it. We believe in all of them,” Harris stated to reporters, according to the tweet from 93.7 The Fan. “Mitch came in and stepped up. Mitch came in and did what he did and we’re not surprised.”

Trubisky certainly came in and stepped up, and it’s a credit to him being prepared as the backup quarterback in a situation that he likely was never going to see action in outside of an injury. Once Pickett went down though, its as time for Trubisky, and he came in and produced, connecting multiple times with Chase Claypool on big throws, one to George Pickens on a third and long, and even went uptempo and caught the Buccaneers in a too many men situation, resulting in a 45-yard free play to Heyward, sparking the Steelers’ offense.

Adversity comes in many shapes and forms. Trubisky stared some down in Week 4 after he was benched at halftime against the Jets, ultimately losing the starting job for the black and gold. He then faced more of it on Sunday entering the game on short notice due to injury.

He was ready. The moment wasn’t too big, the task wasn’t overwhelming. He did his job at a high level and deserves a ton of credit for the win over the Buccaneers.