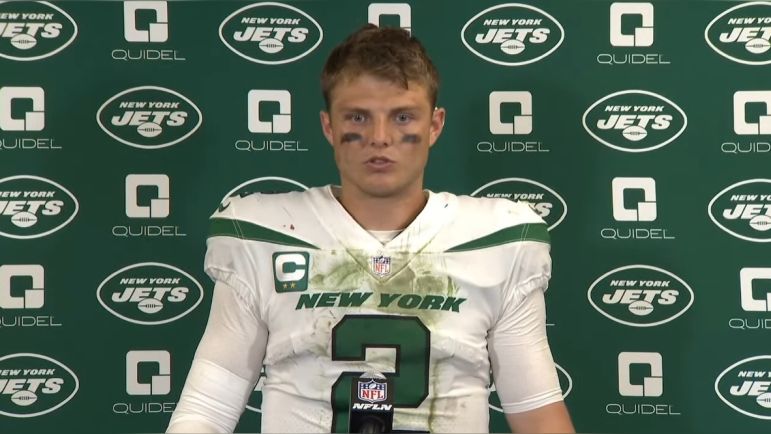 Evading pressure is a useful and underrated skill for quarterbacks, and Pittsburgh Steeler fans saw Ben Roethlisberger do so for many years, albeit in a different manner. Indeed, while the Pittsburgh Steelers’ pass rush seemingly generated a consistent rush against the New York Jets’ injured offensive line, the team ended the game with one sack. In quarterback Zach Wilson’s debut and return from knee injury, he displayed his mobility early and often, escaping Steelers defenders to keep plays alive or live to fight another down. When asked about his mobility in his postgame press conference, Wilson commented on his overcoming the knee injury.

“The cool part is I feel like I’m in such a good spot with the knee that from the beginning,” Wilson said when asked about evading pressure against Pittsburgh according to a team transcript. “I never thought about it once the entire game. I felt like I was in a pretty good spot. I felt like our training staff did a good job getting it ready for me. There’s so much going on, I don’t think I thought about it once.”

Wilson, who sustained a knee injury in the preseason, appeared to be unbothered against the Steelers. On the Mike Tomlin Show on Saturday, the Steelers’ head coach pointed out Wilson’s mobility as something to prepare for as opposed to Flacco, but insinuated that his injury may impact that. Evidently and according to Wilson, this was not the case, as his mobility was arguably the Jets’ X-factor in this game.

After replacing longtime Steelers rival Joe Flacco at quarterback, Wilson undeniably added a new facet to the Jets’ offense with his mobility. It is not a stretch to suggest that the Steelers may have had five or more sacks if Joe Flacco was playing quarterback. In fact, the missed sacks may have determined the outcome of the closely-contested game by stalling some Jets’ drives.

The Steelers will not get a break from mobile quarterbacks, as they prepare to face Josh Allen and the Buffalo Bills on Week 5. On paper, the Steelers are likely underdogs, and they must capitalize on any chance they get to sack Allen and slow the Bills’ high-powered offense.