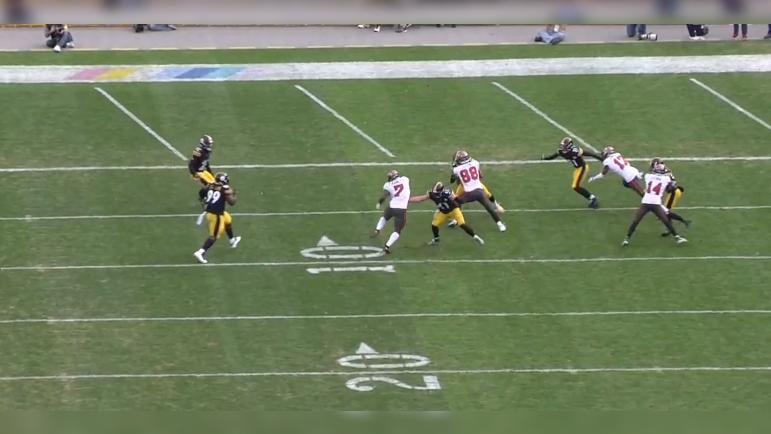 Short-handed, backed into a corner and a massive underdog for the second straight week, the Pittsburgh Steelers needed to be on top of their game in all facets against the Tampa Bay Buccaneers Sunday.

Turns out, they were, especially in the tackling department.

Down four starting defensive backs and still without T.J. Watt, the Steelers turned in a season-best performance in the missed tackles department, tying the performance the black and gold put up in Week 1 on the road against the Cincinnati Bengals.

Against Tampa Bay, the Steelers missed just six tackles, three of which occurred on one play.

That’s pretty darn good, considering how short-handed the Steelers were on the defensive side of the football taking on Tom Brady.

Missing just six tackles against the Buccaneers, considering the circumstances the Steelers were dealing with entering the game, is quite remarkable. A number of young players stepped up and played rather well defensively, leading to the strong performance on the defensive side of the football.

Second-year safety Tre Norwood missed three tackles in the win, but he was around the football constantly, and fired downhill against the run with force, which was a welcome sign compared to what he put on display at times in college. Since he came into the NFL, he has done a good job of playing with some physicality at the position.

On this 4th and 1 crack toss to Leonard Fournette, Norwood does an excellent job filling downhill and coming with power. He does a nice job getting his head across the front of Fournette. He just doesn’t warp, allowing Fournette to bounce off and gain another 5 yards.

As Mike Tomlin always says, he’d rather tell a young player “whoa” than “sic ’em” and that’s the case with Norwood. He’s playing with force downhill and that’s a tremendous sign, even if he missed a tackle.

Earlier in the game, defensive tackle Chris Wormley missed his lone tackle of the game on a run by Tampa Bay rookie running back Rachaad White.

Wormley played a great game Sunday and does an excellent job of stacking in the box here against the Tampa Bay offensive lineman. He gains control of the rep with his inside arm to find the ball carrier and shed. He does everything right up until the tackle point, failing to wrap up White in the hole, resulting in the missed tackle, taking out the legs of Alex Highsmith in the process.

Fortunately for Wormley, the Steelers rallied to the football quickly and got the Tampa Bay running back on the ground quickly.

While it was a terrific day overall in the tackle department, the Steelers did combine on a missed tackle that resulted in the lone Tampa Bay touchdown of the afternoon, that coming on the swing pass from Tom Brady to Fournette out of the backfield.

Robert Spillane is the first one to miss. He plays the swing pass well, getting out into the flat quickly to get to Fournette. He just overruns the running back in the flat, allowing Fournette to easily slip back inside.

From there, it’s on Norwood to get the lumbering running back on the ground. He fails to do so, not wrapping up at the contact point. Then, practice squad elevation Quincy Wilson serves as the final speed bump for Fournette before he gets into the end zone.

Offensively, the Steelers had a strong day in the forced missed tackles department, forcing nine Tampa Bay misses, winning the tackles battle by a mark of +3, improving the season mark to 2-3-1.

In fact, the Steelers forced three missed tackles on the final drive of the game to milk the clock.

In his second game as the starting return specialist for the Steelers, Steven Sims made quite the impact for the black and gold.

Opening up the second half, Sims ripped off an 89-yard kickoff return that ultimately set up a field goal from Chris Boswell, giving the Steelers a 13-9 lead. Later, he made an impact on a punt return in the third quarter, ripping off a 24-yard return, forcing two Tampa Bay defenders to miss.

Offensively, running back Najee Harris kicked things off on the final drive of the game with an impressive 8-yard run off right tackle.

He shows off his great contact balance and upper body strength to throw Tampa Bay linebacker Lavonte David before then stepping out of second-year defensive end Joe Tryon-Shoyinka’s tackle attempt. Harris does a great job of fighting for extra yardage consistently, and he showed that here against the Buccaneers.

Outside of Harris, backup quarterback Mitch Trubisky did a great job of forcing a missed tackle on his 9-yard run on a read-option.

Wide receiver Diontae Johnson gets just enough of Tampa Bay cornerback Carlton Davis to give Trubisky a lane to the outside, where he’s able to step through Davis’ tackle attempt and get to the sideline. From there, he’s able to stiff-arm safety Antoine Winfield Jr. just enough to pick up a couple extra yards, setting up a second and one, which he then converted on the next play with a 3-yard quarterback sneak.