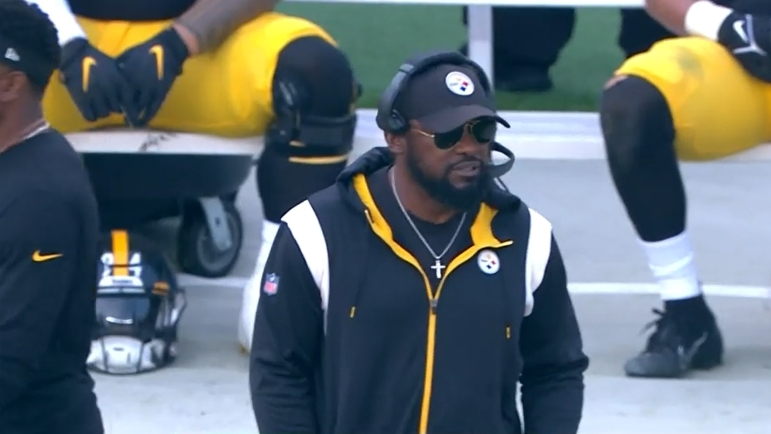 Sitting at 1-4, the Pittsburgh Steelers’ season has, to say the least, not gone as planned. Pittsburgh heads into Week 6 banged up and taking on a talented Tampa Bay Buccaneers squad led by Tom Brady, a quarterback who has consistently got the better of the Steelers going back to his time with the New England Patriots. Needless to say, the road doesn’t look any easier. Still, coming off an embarrassing 38-3 loss against the Buffalo Bills, the Steelers know they have to be better. Mike Tomlin gave his keys to the game against the Buccaneers, via Steelers Live on Twitter.

“You gotta mix it up. You can’t have a static launchpoint, Tomlin said. “You can’t be one-dimensional in any way.” Tomlin pointed out some of the stars of the Buccaneers’ defense, including Devin White, Vita Vea, Shaq Barrett and Lavonte David. “We can’t be static, we can’t be predictable. We got to do the things we believe in, and equally as important, we got to do them well.”

The Buccaneers are loaded defensively, with Antoine Winfield Jr. at safety and Jamel Dean at corner, who’s been really impressive this year. At linebacker, White has graded out poorly on PFF, but he’s still been an impact player with three sacks and 40 total tackles with a forced fumble. Needless to say, the Steelers are going to have their hands full tomorrow on both sides of the ball. However, Tomlin preached that the Steelers need to focus on themselves coming off the blowout loss against the Bills.

“We respect what they’re capable of and the people that we mentioned, but when you’re coming off the type of performance we’re coming off of, you look nowhere other than within and talk about what you do well and who does what well and let that be the catalyst for planning.”

Pittsburgh was a mess last week, with all three phases struggling. It’s imperative that the Steelers play better. Even if they aren’t able to pull out the win, they have to inspire a little confidence in each other and in the fanbase by at least putting more than three points on the board and playing competently defensively.

With how banged up the secondary is, I’m fully expecting Brady to have a big day, but the Steelers have to do at least a little bit more than they did against the Bills. On defense, they didn’t even get a hit on the quarterback. That’s something that’s gotta change. If the Steelers can get noticeable improvement in all three phases (which frankly shouldn’t be that hard to do), then hopefully the game is a little bit more competitive.

Finally, Tomlin emphasized the lack of good red zone offense has been one of Pittsburgh’s biggest issues this year.

“That’s one of the reasons why you’re 1-4, to be quite honest with you, those plays that are weighted differently. “We just have to put together better plans and play better.”

The Steelers have seven touchdowns in five games. That’s obviously not even close to good enough, and it speaks to poor execution and poor game planning when the Steelers get inside the red zone. Against the Bills, they had one score in four red zone trips. The biggest problem is that the Steelers don’t get in the red zone enough, as their four trips on Sunday were the team’s season high. The offense has looked better under Kenny Pickett, but they need to score. Improving the passing offense in the red zone will be paramount, as the Steelers have a season-low two passing touchdowns this year. It won’t be easy against Tampa, but the Steelers absolutely have to be better. Even if they don’t win, they have to make it a competitive game. Let’s see if it happens.