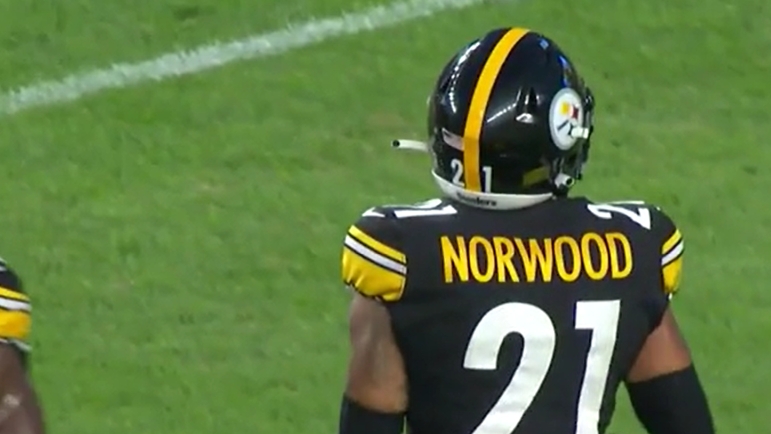 The Pittsburgh Steelers’ secondary on Sunday featured a plethora of backups getting a high number of snaps, as the team was missing their three starting cornerbacks and a starting safety. Despite that, the Steelers were able to pull out a 20-18 win over the Tampa Bay Buccaneers. The only two members of the defensive backfield who had seen any sort of significant playing time throughout the season heading into the Tampa Bay game were starting safeties Tre Norwood and Minkah Fitzpatrick. In his postgame press conference on Tuesday, Tomlin praised them both for their play and communication ability on Sunday.

“He was productive, we got him down around the line of scrimmage some. Being the only veteran in that group I can’t say enough about what he was able to do in terms of holding that group together on the field doing a good job of holding that group together formally and informally. But I’d be remiss if I didn’t acknowledge that Tre Norwood is a unique communicator for a backup. He’s a sharp guy. He’s really good in that area as well. But appreciative of Edmunds’ efforts,” Tomlin said during his press conference via the team’s YouTube channel.

Edmunds had a good day, with 10 total tackles, including one for a loss. He was all over the field, and as the lone regular starter in the lineup, he was the glue that held the rest of the group together. Norwood had a pretty solid day himself, with five solo tackles. It speaks to his football IQ that as a second-year player, Tomlin thinks enough of his communication ability to praise it in this setting. Norwood was also targeted five times in coverage on Sunday, and only allowed two completions for 25 yards and just a single yard after the catch. For his part, Norwood said that increased time spent watching film and in the meeting room helped the secondary’s performance come about. He also said that the presence of Edmunds, a five-year veteran who has only missed two games in his career, helped ease the young makeshift secondary.

As a whole, Pittsburgh’s secondary stepped up and played a lot better than I think probably anybody expected. It was a ragtag group of guys that you’d expect to see playing together in the preseason, not Week 6 of the regular season in a game where a loss sends you to 1-5. Despite the lack of talent on paper, everybody stepped up and did what they were supposed to, and didn’t allow Tom Brady to beat them. It was an impressive performance across the board, and the communication and leadership of Edmunds and Norwood were clearly two of the keys that helped lead the Steelers to victory.