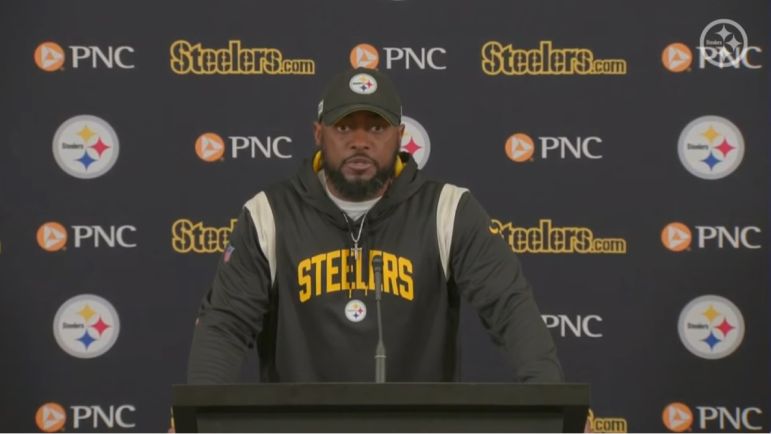 Mike Tomlin is sticking with Matt Canada. And his reason won’t make anyone in Steelers’ Nation happy. With the 31st-ranked offense through seven weeks, Tomlin was asked Tuesday if he would consider making a sweeping change to the Steelers’ offense, heavily implying a change in playcaller. Tomlin said he wasn’t at a point where he felt a change was necessary.

“Because I don’t feel like I’m there,” Tomlin said via the team’s YouTube channel when asked why now isn’t the time to make a radical move.

Through seven games, the Steelers are averaging just 14.3 points per game, only the Denver Broncos are worse, with an offense that hasn’t scored more than 20 points in any game this season. The only time they eclipsed that mark came in the Week One opener but a defensive touchdown helped put Pittsburgh over that mark. Including the playoffs, the Steelers’ offense has scored more than 21 points in a game just one over their last twelve contests. Over that span, they’re averaging only 15.4 points per game.

Pittsburgh’s offense again did very little in Sunday’s loss to the Miami Dolphins. With a defense that held the opposition to just 16 points, normally a formula to victory, the Steelers ended most of their drives with punts (six) or turnovers (three). At one point in the second half, they punted on five straight drives, something they haven’t done on five consecutive possessions since Week One of last season. Of course, that was also a team coached and called by Canada.

The Steelers rank near the bottom in virtually every offensive category. It’s a team without an identity, or at least a good one, with Canada unable to consistently get the offense to produce in his two years as offensive coordinator.

While Tomlin shot down the idea of making any change this week, it’s unclear what his bar for change is, what needs to happen for him to “get there” and replace Canada as OC. Should that happen this season, QBs Coach Mike Sullivan would be promoted to OC for at least the rest of the season. With his close relationship to Kenny Pickett and his previous coordinator experience, he’s the logical and frankly only in-house choice to replace Canada mid-season.

Canada may finish out the season calling the plays for the Steelers’ offense but it’s extremely difficult seeing him return after this season. Should the team move on, they’ll have to wrestle with the decision of going with another in-house promotion in Sullivan, who certainly has merit for the job, with finally going out-of-house and bring in an outsider. Pittsburgh’s stayed in-house for their last two offensive coordinators in Randy Fichtner and Canada.

Pittsburgh’s likely to need points in Sunday’s game against the Philadelphia Eagles. The Eagles come into this game with the 4th-ranked offense and haven’t had a problem putting up 21+ points in a game. In fact, they’ve achieved that mark in all but one game this season.