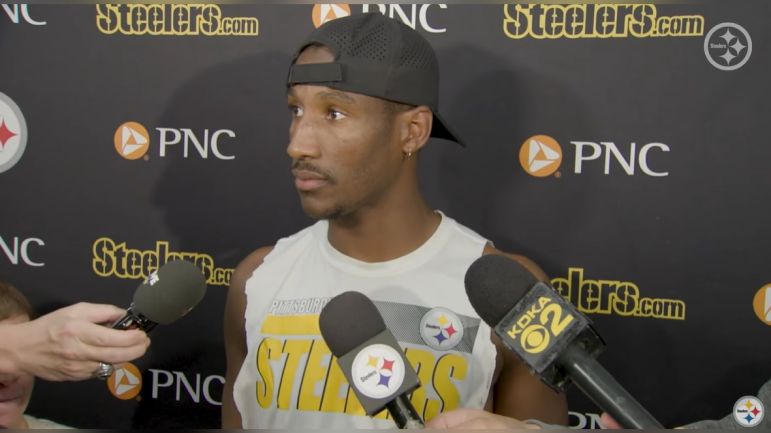 The Pittsburgh Steelers’ defense hasn’t been as strong as the team hoped for entering year. Without T.J. Watt, they’ve regressed weekly. One common theme throughout their struggles have been allowing passes between the numbers. While that doesn’t always fall on an outside cornerback like Levi Wallace, he knows it’s a problem his unit must overcome.

“Limit those middle of the field plays,” he said via the team’s YouTube channel when asked how the defense can get better.

It’s been a problem throughout the first quarter of the season, including Sunday’s loss against the New York Jets. It’s how Zach Wilson turned his game around, going 10/12 in the fourth quarter with one touchdown after struggling through the first three. The Jets’ offense relied on throws between the numbers, hitting WRs Garrett Wilson and Corey Davis along with TE Tyler Conklin for chunk plays and key conversions.

Specifically, Steelers’ linebackers have bitten hard on playfakes, influenced by “trap passes” with the guard pulling on playaction. It’s hard to blame them but Devin Bush, Myles Jack, and Robert Spillane have been suckered up with quarterbacks throwing behind them. Here’s one example from the Jets’ game.

The Steelers linebackers have been biting hard on play-action this year.

Both Bush and Jack read the guard pulling and fly up. Leave TE wide open on crosser behind them. #Steelers pic.twitter.com/5jLTDPZz9O

It was an issue dating back to Week One against the Bengals with WRs Ja’Marr Chase and Tee Higgins catching big gains on similar concepts.

“I haven’t really looked at where we’re getting hit at. We just know we’re giving up too many explosive plays here and so we gotta try to minimize that.”

Through four games, the Steelers have allowed 14 passes of 20+ yards, tied for the eighth most in the league. They’ll have to be better than that this weekend facing Wallace’s former team, the Buffalo Bills, who have potent weapons across the board in WR Stefon Diggs, TE Dawson Knox, and speedster Gabe Davis. Knox will be an issue over the middle that Steelers’ linebackers will have to contend with.

Pittsburgh’s eyes must be more disciplined too in order to avoid opening up big throwing windows like they’ve allowed this season. Hopefully the Steelers will have a healthier secondary come Sunday, too. As of Wednesday, every starting DB – including Wallace – was listed on the injury report.