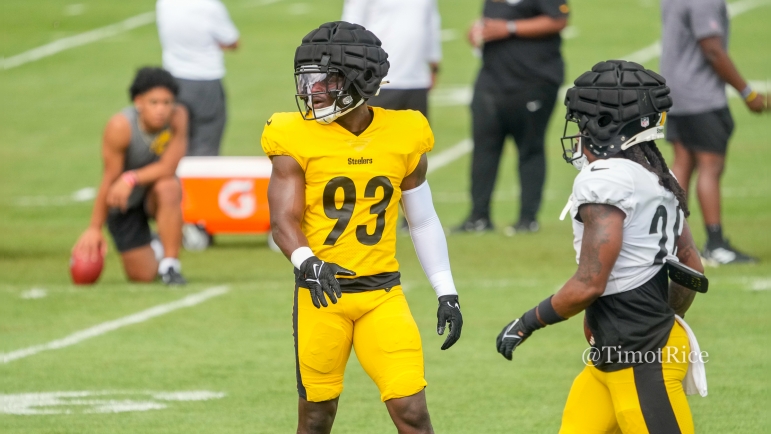 Sunday was a day of firsts for the Pittsburgh Steelers. First home win. Heck, first win in a month. The first home start for Kenny Pickett, the team’s first win without T.J. Watt in the lineup. It was also a first for seventh-round rookie LB Mark Robinson, dressing for the first time of his career.

Due to the slew of injuries, five players inactive solely because they weren’t healthy, Robinson got a helmet. Though he logged just a handful of special teams snaps, five in total, it was a momentous occasion.

“It was a golden day for me,” he said via The Trib’s Chris Adamski.

Robinson’s role was limited, only used on one phase of special teams on the kick coverage unit. He didn’t show up in the stat sheet but did help on a stop in the first half. Robinson was a summer darling, a high-energy, high-intensity player who quickly proved himself to be an impact hitter. He performed well in training camp and carried that over to the summer. Here’s what we wrote about Robinson in our post-camp recap:

“His quick see-to-do, his downhill nature, and his physicality – oh boy does he love to hit. He also displayed short-area quickness and change of direction ability in camp to make plays in 1v1 drills. What’s most impressive is he plays under control. He’s not out of his gap or running around without a plan. That controlled aggression for how young he is is unique. In coverage, Robinson is competitive at the catch point and knows how to finish, though his success inside stadiums were a different story. When targeted, Robinson allowed five catches on six targets for 56 yards and a touchdown. His play on special teams was a little shaky early but he ended on a quality note with a big stick on kick coverage in the finale against Detroit.”

A healthy off-ball linebacker group kept Robinson in street clothes the first five games, and he figures to return to the inactive list of Sunday night’s game against the Miami Dolphins. But he can get those first-game nerves out of the way.

The fact he’s even on a NFL roster is no small feat. A small school running back, he transferred to Ole Miss and spent just one year playing linebacker. He showed enough to be one of the Steelers’ final draft picks, and has worked his way up the Steelers’ ladder. There’s bound to be an injury to the position at some point, Myles Jack came out of the Bucs’ game with a foot/ankle injury, and all it’ll take is one injury for the door to swing back open for Robinson.