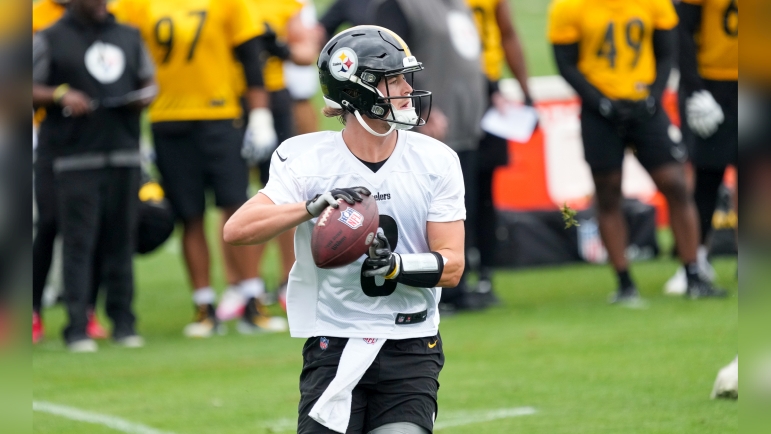 Yesterday during his weekly press conference, Pittsburgh Steelers HC Mike Tomlin addressed the media and stated that QB Kenny Pickett would start Sunday night against the Miami Dolphins should he be cleared from concussion protocol. According to Tomlin, Pickett is still in the concussion protocol, but was expected to be a full participant in practice the next day.

According to video from ESPN reporter Brooke Pryor’s Twitter page, Pickett did indeed take part in Pittsburgh’s first practice session of the week, a good sign that he is progressing through the protocol at a rate that would allow him to get back on the field in-time for Pittsburgh’s Sunday night matchup with the Miami Dolphins.

“He looked good today,” Steelers wide receiver Diontae Johnson said after practice. “Didn’t seem like nothing was throwing him off. He was just fine throwing the ball and trying to get the rhythm going. Like I said, he just looked fine, feel like he gonna be ready to go.”

Pickett left Sunday’s game against the Tampa Bay Buccaneers after taking a hit from linebacker Devin White. Pickett was immediately placed into concussion protocol with Mitch Trubisky replacing him, playing well and leading Pittsburgh to a much-needed victory. Trubisky finished the day going 9/12 for 144 yards and a touchdown, hitting Chase Claypool from six yards out in the fourth quarter just plays after hitting rookie Connor Heyward downfield for a 45-yard gain, the team’s longest play from scrimmage on the season.

Still, Tomlin made it abundantly clear in his Tuesday press conference that there is no quarterback controversy, stating that the team isn’t going to blow in the wind and flip the script back to Trubisky due to Pickett getting knocked out of the contest with a concussion. Tomlin may be appreciative of Trubisky’s efforts to come in off the bench and help Pittsburgh win the game, but he knows the change to Pickett in Week 4 against the Jets was the moment that the Steelers would commit to their first-round rookie QB for the foreseeable future to see if he can become the team’s new franchise quarterback.

Should Pickett continue to progress through the protocol throughout the week, we’ll get to see him take another step in that direction as Pittsburgh’s starting QB against the Miami Dolphins in primetime Sunday night.