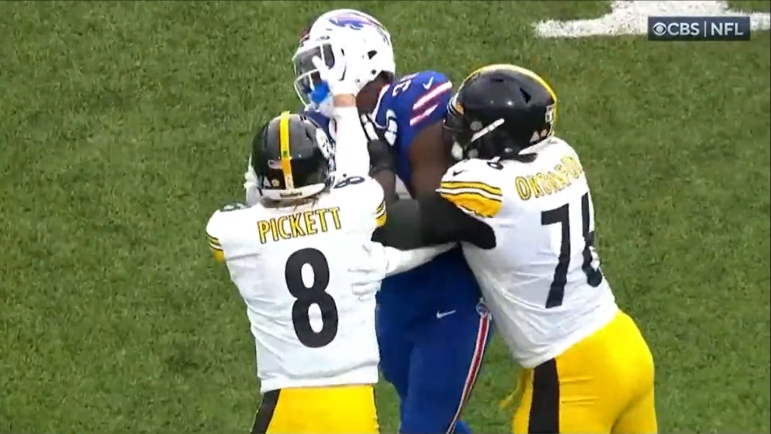 The Pittsburgh Steelers may have lost the battle on Sunday, but…well, they didn’t win the war, either. But their new quarterback showed some potential at least, and some spirit. Already showing a willingness to take hits within the context of play, Kenny Pickett also displayed the tenacity to stand up for himself against a very questionable hit.

Pickett took a hit at the knee from Buffalo Bills defender Shaq Lawson with about a minute to play on a 4th-and-17 throwaway in a 35-point game. He shoved Lawson in response, which drew a penalty for himself—none on the defender. But his reaction has been widely lauded—even by Bills players.

“I liked it”, Buffalo wide receiver Stefon Diggs said on The Voncast, a podcast hosted by his teammate, Von Miller. “Shit, he’s not my quarterback though so he’s still the ops, but as I saw him do it, I was like, ‘That takes a lot of guts from a quarterback to push a d-lineman, especially one like that”.

Kenny Pickett showed heart in the scuffle vs. the Bills pic.twitter.com/hV1VEjpA1b

“Shaq ain’t no sucker”, he went on. “It showed he’s tough. And his teammates came and backed him, so you gotta, one, give him some respect, and two, be like, alright, he got some shit with ‘em. He ain’t your regular little run-of-the-mill, Imma just take it on the chin”.

One would hope that, for the most part, NFL players are not in the business of trying to physically injure each other. I don’t know what type of hit Lawson was going for, but the one he ended up putting on Pickett was certainly a dangerous one, as it ended up around the knee area.

Pickett said as much after the game, when asked why he responded to Lawson the way he did, telling reporters that, from his perspective in the moment, he felt like the defender was going for his knee after the throw.

And it wasn’t the first hit that he had taken during the day. The first one that was questionable was even from a former college teammate, Damar Hamlin, who got blasted by guard James Daniels—who has also been widely praised in the locker room. But even Bills defenders appreciated the fire from their rival quarterback.

“I don’t think it’s so much about the hit that Shaq had on him”, Miller said. “I think it was so much like, ‘Our score and the situation that we’re in, it’s not acceptable. This is not gonna be us. This is my first start, but I’m gonna show you I’m not accepting this shit. This ain’t good with me’”.

In other words, they would want to see their own quarterback respond in kind if placed in the same situation. And it makes matters worse when it appears evident that the officials are not protecting him in the same way as they might other quarterbacks, as Steelers head coach Mike Tomlin said in his post-game press conference.