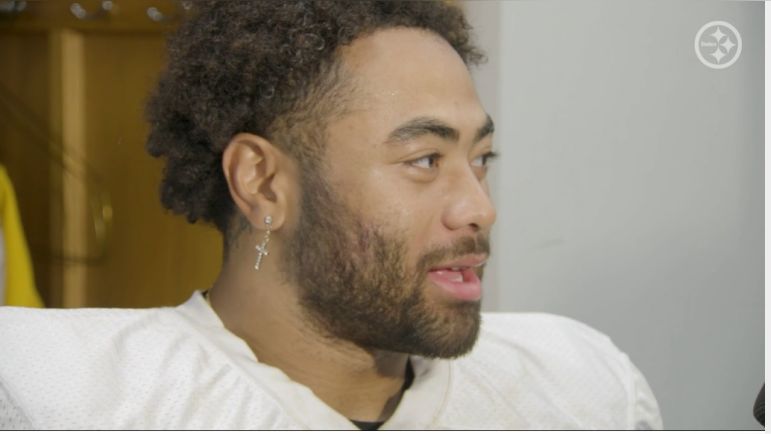 One of the more pleasant surprises for this Pittsburgh Steelers team is the emergence of undrafted rookie running back Jaylen Warren. Having started out as a UDFA signing out of Oklahoma State, he climbed his way up to the backup role behind first-round pick Najee Harris, beating out experienced draft picks Benny Snell and Anthony McFarland Jr. in the way. Warren’s downhill running style and his willingness to pass protection make for a perfect change-of-pace back behind Harris. On Wednesday, Warren was asked about incorporating patience into his running style.

“You see, I try to do what Najee does, but I can’t do it,” Warren said when asked if he can emulate Harris’ patience in a Wednesday press conference via Steelers.com. “So I gotta be decisive, you know. He’s a great talent, he can do all those things. I can’t really do it and I’m not usually successful when I do try. In high school, my coach just told me to get vertical. That’s like all you can think of as a runner. So when I feel myself kind of going lateral in my head while I’m running the ball, I’m like, I need to get vertical. So I just take whatever’s in front of me.”

The workhorse back is arguably outdated in the NFL. It is hard to name an NFL offense that thrives from feeding the ball to one running back, as was the case not too long ago with the likes of Marshawn Lynch and Adrian Peterson. The Steelers, who gave Harris the most touches in the NFL in his rookie season last year, appear to be more willing to distribute the ball with Warren on the team.

Indeed a patient runner, Harris is a different type of running back than Warren in many ways. Warren’s measurables as a relatively undersized back are optimally utilized in a downhill and vertical running style, which he seems to recognize. Warren appears to have carved out a role as the team’s third-down back, and has made the very most of every touch.

It is no secret that Harris and the Steelers rushing attack are struggling this season. On 69 carries, Harris has an abysmal 3.2 yards per carry. On a much smaller sample size of 19 carries, Warren is averaging 4.9 yards per carry. A variety of factors, such as Harris’ injury, poor run blocking, and poor play design contribute to this. Indeed, the offensive line blocks better for Warren than Harris, the former averaging 2.21 yards per contact and the latter 0.74. Nonetheless, a certain amount of responsibility falls on Harris.

As far as patient running backs go, the Steelers are no stranger, as former Steeler Le’Veon Bell was arguably the leagues top back at one point with his patient running style. However, this running style was unique by every meaning of that word, and it does not appear like one that Harris can emulate. This type of patience requires elusiveness, a category that PFF ranked Harris near the bottom of in his rookie season. Bell, unlike Harris, also benefitted from playing behind a veteran and elite offensive line.

All of this is to say, it is wise for Warren to stick to his instincts as a vertical runner rather than a patient one, and that may also be the case for Harris.