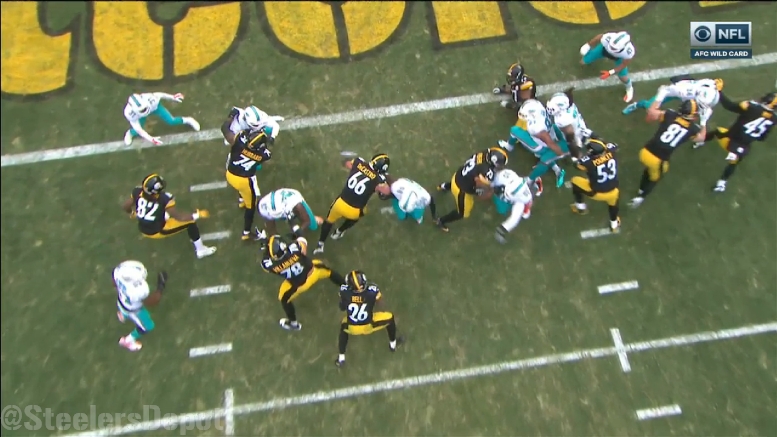 You may have recently picked up Pittsburgh Steelers running back Le’Veon Bell telling reporters that he feels as though he is changing the way the game is played similar to the way that Stephen Curry has in the NBA. Curry has spent the past few seasons shattering three-point records and demonstrated that you can win a championship with a long-ball offense.

Bell was referring to his style of running, which incorporates an incredible amount of patience that allows for blocks to be set up, or for holes to open, or that forces defenders to commit and allows the runner to counter as a result.

But I find that I have to agree with the Steelers’ last great running back—no disrespect to Willie Parker, who was very good—Jerome Bettis, who told Aditi Kinkhabwala when asked about Bell’s comments that he disagrees with Bell’s assessment about his impact on how the football is run.

Why? Because “Le’Veon is a one-off”, Kinkhabwala Tweeted. Said Bettis, you can’t teach the sort of patience that Bell has. The old-school power runner even confessed that he finds that at times he is yelling at the screen telling Bell to hit the hole.

I think that Bettis is right, here. Bell’s running style is not going to revolutionize the game, because the way that he plays the running back position requires a very specific skill yet that is incredibly rare to find. His individual success cannot be duplicated simply by watching the way that he runs.

Just look at Bell’s first touchdown run against the Dolphins on Sunday. The Steelers were facing second and goal from the one-yard line. He stopped moving his feet completely in the backfield, from the one-yard line, waiting for a hole to develop, before attacking it and getting just enough to make it across the goal line.

To be blunt, if another young running back stops moving his feet at the goal line—perhaps even if he doesn’t get in—he’s going to get chewed out by his coaches. In a way, you can talk about Bell in the same way that you can talk about a defensive player who is trusted enough to be allowed to freelance his assignments to a degree.

Bell has been given a level of trust by the coaching staff, and an understanding from the offensive line, about how he runs, which has been the product of a development of years of working together. You are not going to get that just coming into the league.

And it’s not as though the Steelers are inexperienced with runners who show hesitation. Rashard Mendenhall was loathed by some for his running style, which did not translate the same sort of results that Bell had.

While that can be partly attributed to the disparity in offensive line play, there is clearly more to it than that in separating Mendenhall’s hesitation running and Bell’s methodical patience. It’s something that can be imitated, but not duplicated—at least not that I foresee.

Even the head coach of his next opponent, Andy Reid, chimed in, calling Bell the most patient runner he’s ever seen—and the man has been around for quite a while, describing his style of running as “unique” and “one that he’s kind of created”.