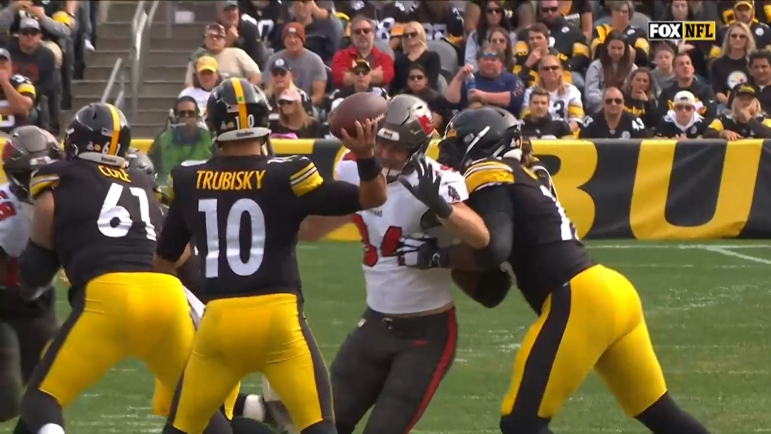 The Pittsburgh Steelers haven’t often found themselves in the position to try to close out a game this year, simply because, well, they haven’t scored enough points. Instead, they were trying to play spoilers to their opponents who were trying to close out the game.

But they finally got that chance on Sunday against the Tampa Bay Buccaneers, and wouldn’t you believe it, they were successful. While the defense allowed a touchdown late in the fourth quarter to come within a field goal of winning the game, the offense managed to run out the final 4:38 minutes of game time, and that consciously turned to the run game in order to do it.

“Yeah, in four-minute, that’s the goal is to run out the clock, and that’s the easiest way to do it”, guard James Daniels told reporters yesterday via the team’s website about working the run game in that situation.

“You don’t have to worry about incomplete passes or a receiver catching the ball on the sideline and having him pushed out so it stops the clock. So yes, that’s the goal in the four-minute offense is to run the football”.

The Steelers’ final drive consisted of eight meaningful plays, of which only two were passes, both coming on third and long. It was actually mostly quarterback Mitch Trubisky running himself, though, including the final two contested plays of the game. Najee Harris only had two carries, the first of the drive for eight yards, and another for three yards.

Of course there was that aborted play due to a bad snap from center Mason Cole, which nearly doomed the drive out of the gate, turning a 2nd and 2 into a 3rd and 15. “You still want to extend the drive, and I feel like passing on third and long makes it a lot easier to extend the drive than on a run play”, Daniels said of being forced to put the ball in the air when the game plan was to run it.

We could easily be having a much different conversation if not for the two excellent plays made between Trubisky and wide receiver Chase Claypool to extend that drive twice in very critical possession downs under adverse circumstances.

We certainly can’t say that the four-minute offense went smoothly, given the plays of 3rd and 15 and 3rd and 11. A smooth drive never puts you in those situations. But hey, at the end of the day they got the job done, right? There’s still plenty of work to do to get this offense ready to close out more games, but only the wins and losses ultimately matter no matter how they’re earned.