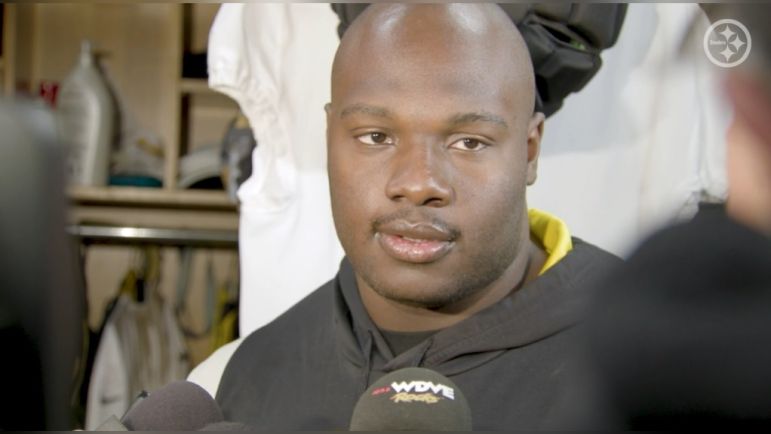 When you play Tom Brady, victory isn’t secured until the clock hits triple zeros. Beating Brady Sunday meant not giving him the ball back for one final drive in a two-point game. For the first time all season, Pittsburgh finished a game. Speaking to reporters Wednesday, offensive guard James Daniels spoke to how important that possession was.

“We know that’s four-minute offense,” he said via Steelers.com. “Being able to end the game with the ball in our hands is very hard to do. But that’s how you win games.”

After a Leonard Fournette touchdown and failed two-point conversion, Pittsburgh got the ball back up 20-18 with 4:38 left. They held the ball the rest of the way thanks to two crucial 3rd and long conversions, Mitch Trubisky finding Chase Claypool for 17 on 3rd and 15 and 26 on 3rd and 11. A hard fought win that ended in the ideal formation: victory.

Pittsburgh certainly didn’t make the last drive easy. Najee Harris opened things up with a powerful eight-yard run. But center Mason Cole botched the ensuing snap with Trubisky making a good play to fall on the football. A turnover there likely would’ve resulted in a Steelers’ loss. Still, it put Pittsburgh in 3rd and 15 but Trubisky hit Claypool over the middle for a 17-yard gain.

Plays later, the two connected again, Trubisky extending the play and Claypool making a fantastic grab along the sideline. One more first down ended the game and secured an upset victory.

Running out the clock is always the goal, always ideal, but Daniels said it was discussed in the huddle, a young and growing offense realizing they needed to make the most of the moment.

“It was discussed. You can never assume anything.”

Getting stops and keeping the ball weren’t things the Steelers did well in their close losses. In Week 2, the New England Patriots utterly controlled the fourth quarter. In Week 3, the New York Jets found the end zone over their final two drives while Pickett threw a costly interception. And in Week 4, the Cleveland Browns grinded things out to the end, their offensive line and Nick Chubb keeping the offense on schedule and moving the chains. Pittsburgh got on the right side of a final drive and for the first month, earned a victory.