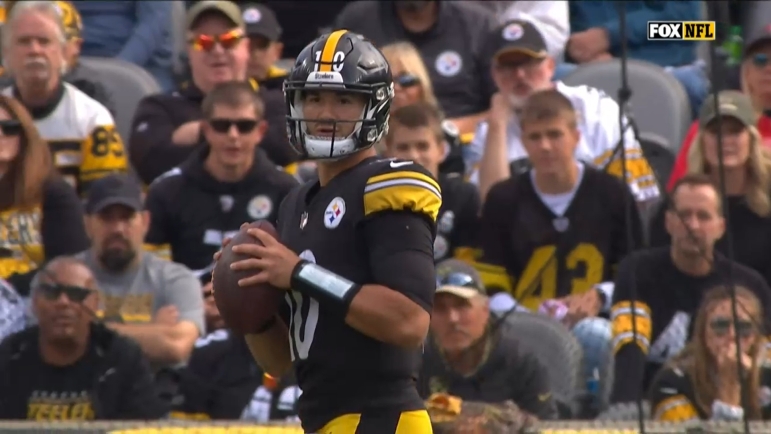 The Pittsburgh Steelers weren’t necessarily in dire peril just before rookie quarterback Kenny Pickett was knocked out of Sunday’s game. They had the lead at the time, after all. Nevertheless, the fact remains that with a quarter and a half left to play, the job wasn’t done, and they needed somebody to step up. Mitch Trubisky, the benched starter, did just that.

“It was awesome seeing him bounce back from adversity”, defensive captain Cameron Heyward said on his Not Just Football podcast posted last night. “Nobody wants to get replaced. Nobody wants to be benched, but we have to wait our moments, and if we’re ready for our moments, we can do some special things”.

Signed in free agency, Trubisky was given a clear path to open the season as the starting quarterback, and he didn’t diverge from it. He reached that point, but he struggled through three and a half weeks before head coach Mike Tomlin pulled him at halftime. He had been on the bench since then until Pickett hit his head on the ground after taking a shot and suffered a concussion.

“Kenny getting hurt, Mitch stepping up in that moment, we needed somebody, and you don’t just vote him a captain because you’re the quarterback”, Heyward said of Trubisky. “It’s because you know how to lead. And he did a great job on Sunday, extending some plays with his feet, with his mobility. And then, with that mobility, he was able to deliver some really good passes”.

He finished the game having completed nine of 12 pass attempts for 144 yards with one touchdown, which proved to be the game-winner. “It was a rocket in there”, Heyward said of that red-zone score, also praising the clinching third-down conversion, both to wide receiver Chase Claypool.

“Him scrambling out, Chase going one way, then coming back, the ball being on point, Chase staying inbounds. What a great play it was”, he said. That was on 3rd and 11, one of several third-down plays of 11 yards or more that he managed to convert.

INCREDIBLE THROW BY TRUBISKY AND INCREDIBLE CATCH BY CLAYPOOL TO CONVERT ON THIRD DOWN! pic.twitter.com/FT21Ft54LV

It was, frankly, a performance not likely to be duplicated, yet there is something to be said for the difference between his style of play as a starter under fire and as a backup with nothing to lose. There are grounds for accepting the premise that he could play better than he did earlier this year if put back into the lineup.

But Tomlin has already made it very clear that Pickett is still thee Steelers’ starting quarterback, and as long as he is cleared from the concussion protocol in time for Sunday’s game, he will be right back in the starting lineup. That doesn’t take anything away from Trubisky’s strong 22 minutes on Sunday, but for now, that’s all that it is.