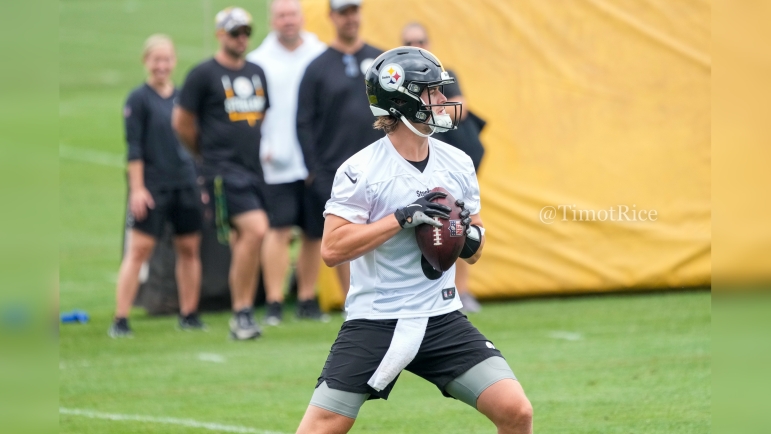 If you weren’t sure what kind of mentality Kenny Pickett would bring to the NFL, you found out one pass into his professional career. A deep shot downfield for WR Chase Claypool that unfortunately was picked off but an aggressive shot for a big play on 1st and 10 for a first career dropback.

Pickett’s aggression has shown as he’s gotten more reps. His first week of training camp was anything but. Pickett was a checkdown king, throwing nothing beyond five yards and playing it safe. But more time led to more comfort and Pickett came out of his shell as the summer went on pushing the ball downfield. He still wasn’t a gunslinger but took more chances, impressing during preseason action and looking composed and confident in the pocket.

In his first action against the Jets, he repeatedly threw downfield, hitting George Pickens on back-shoulder throws, stood tall and hit Pat Freiermuth down near the goal line, and had that first throw to Claypool. While it ended in an interception, Canada said he wasn’t upset with the decision.

“I talked to him and we were going to stick with the plan and we thought that was a one-on-one matchup with Chase [Claypool]…it didn’t work out. That’s the way life goes. We understand that. But there was no hesitation on making the call and there was no hesitation on him throwing it. It just is one of those situations that you wish would have been a couple inches different, then it would have been a different deal.”

Pickett became the first Steelers’ QB to throw an interception on his first pass since Jim Miller in 1995 and just one ahead of Ben Roethlisberger, who was picked on his second career pass attempt. As we noted in our evaluation of his play, the decision wasn’t a bad one, Claypool against a 5’8 safety, but Pickett could’ve led Claypool a bit more and away from the backside safety, who picked off the tipped pass. Claypool needs to win a contested moment like that, and blame can be shared on the play. But Canada isn’t against the aggressive decision.

“Kenny’s a competitive guy. He’s a great leader. He enjoys it. He loves to compete. He’s a student of the game.”

Though it wasn’t for a lack of trying under Mitch Trubisky, the Steelers’ offense needs to hit big plays. Hopefully Pickett can provide that and the only way he will is with an aggressive mindset.