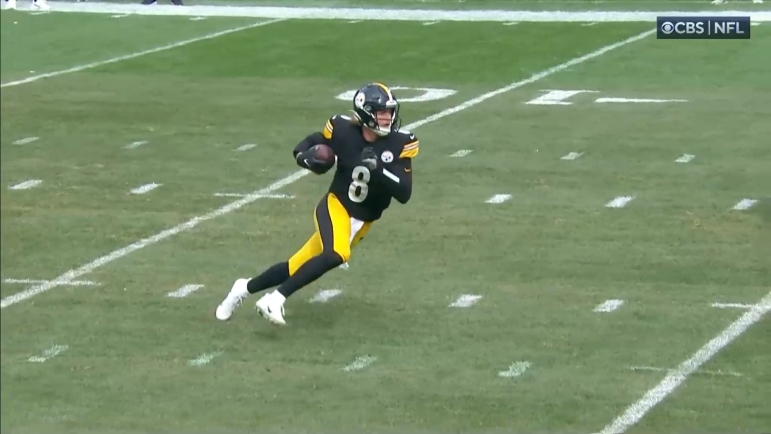 – None of Kenny Pickett’s 13 pass attempts hit the ground. Ten of them were complete. The other three were intercepted.

– But this one is pretty wild. Pickett threw an INT on his first career pass, making him the first Steelers’ QB to do so since Jim Miller in 1995. That came in a Week One loss to the Detroit Lions and was Miller’s only pass of the day.

Ben Roethlisberger and Mason Rudolph threw INTs on their second career pass attempt. So Pickett is one ahead of both.

Pickett is the first QB league-wide to throw an INT on his first career pass since Los Angeles Rams’ QB John Wolford did against the Arizona Cardinals on January 3rd, 2021.

– Pickett had two rushing touchdowns Sunday, making him the first Steelers’ rookie QB in history to have two in any game his rookie season, much less his first game. He’s the first Steeler at any position to do it since Le’Veon Bell in 2013. Pickett and Bell are the only two players in team history with two rushing TDs in their debut game. Bell did his in Week 4 of 2013, also coming in a loss.

As far as Pro Football Reference tells me, Pickett is the first QB in history to have two rushing scores in his first career game. Pretty wild. Only four have done it in their first start, the last two being Daniel Jones in 2019 and Aaron Brooks in 2000 along with Brian Sipe in 1974. Of course, Pickett did not start in this game and those other names made appearances before their first multi-rushing TD day.

– WR Diontae Johnson had as many yards rushing as he did receiving Sunday, 11 apiece.

– Sunday was only the second time of Chase Claypool’s NFL career he didn’t register a catch.

– Pat Freiermuth’s 85 yards Sunday were the most in his NFL career. It’s the most he’s recorded in a game since November 14th, 2020, a win over Nebraska.

– In Week One, the Steelers recorded seven sacks. They have just three over their last three games. Only one on Zach Wilson Sunday .

– Pittsburgh has had two or fewer sacks in each of their last three games. Such a streak hasn’t occurred since Weeks 13-15 of the 2017 season. The Steelers level of pass rush dominance appears over. At least until T.J. Watt returns.

– Over his last three games, Cam Heyward doesn’t have a sack or QB hit and just one TFL. Excluding injuries, that’s only happened to him twice since 2013, three straight games without a QB hit, the start of the 2016 and 2019 seasons.

– Minkah Fitzpatrick now has three INTs over his first four games. He’s the first Steeler do to that since Troy Polamalu in 2008. Those are the only two Steelers to achieve that feat of the Mike Tomlin era.

– Alex Highsmith had six sacks last season. He has 5.5 through four games this year.

– The Steelers went up 20-10 early in the fourth quarter of this game and blew a ten point lead to lose 24-20. It’s the first time since November 12th, 2000 that the Steelers went up 10+ points in the fourth quarter and lost the game. That day, they went up 23-13 with 3:42 left against the Philadelphia Eagles only to lose the game 26-23 in overtime. So 22 years since the Steelers blew a lead the way they did yesterday.

It’s worth pointing that between then and now, there have been multiple games in which Pittsburgh entered the 4th quarter up ten points and lost, most recently in 2012 against the Raiders. They took a 31-21 lead heading into the fourth quarter and lost 34-31 in regulation. But going up ten points in the fourth quarter is an even bigger choke since the opposition has less time to respond.

– Finally, this is only the second loss the Steelers have ever had to the Jets at home. The other came in 2010, a 22-17 defeat. Pittsburgh is now 8-2 all-time at home versus New York.