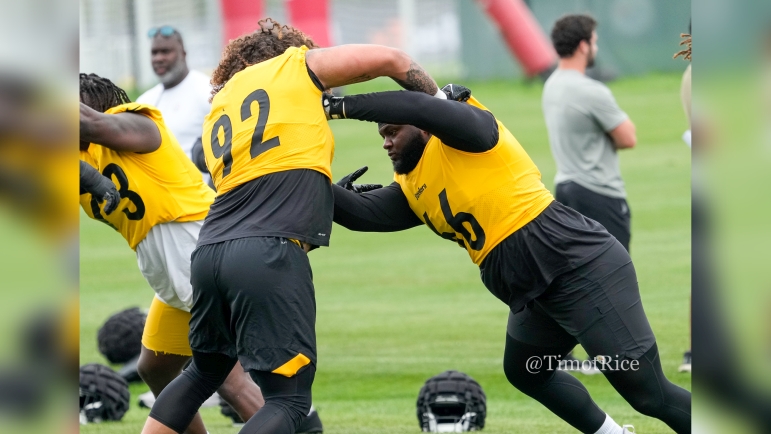 After the injury to third-round selection defensive end DeMarvin Leal, who the team had used in multiple different roles, the next man up was Isaiahh Loudermilk. A second-year Steeler who played 15 games his rookie season, Loudermilk was inactive for every game before last Sunday, mainly due to the team’s increased depth at the position. When asked about the significance of run defense, Loudermilk delved into the impact it has on games in a Friday interview with Mike Prisuta on iHeartRadio Pittsburgh.

“I think games start with taking away the run,” Loudermilk said when asked about the significance of run defense. “If we can get that done up front and help up front, of course it’s a whole defense thing. If we’re getting knocked back up front, if we’re getting pushed back push up front, that helps the back end a whole bunch. When we’re able to do that, you know, kind of get ’em in, passing down, you can predict what people are gonna do a little bit more. And you know, the back end has been doing great too. For us up front it was making sure we stopped the run first, get some pressure to help the back end too.”

Loudermilk is among a relatively rare list of players that the Steelers have traded up for, as they traded up to select him in the fourth round in the 2021 NFL Draft. Former general manager Kevin Colbert was very high on Loudermilk, stating that the team had a fourth-round grade on him. After the signing of defensive end Larry Ogunjobi and drafting of Leal, Loudermilk did not dress for the first five games of the season. Another rare attribute that Loudermilk possesses is his 6’7 height, which is in the 97th percentile for his position.

As Loudermilk stated, the team’s run defense is significant to its success. Loudermilk played for a defensive front that ranked dead last in the NFL for run defense, which has improved. The team limited Tampa Bay Buccaneers’ running back Leonard Fournette to three yards per carry, which was instrumental to its winning effort. After ranking dead last in the NFL in yards allowed last season, it’s safe to suggest that this unit has improved, as it ranks in the top 10 in rush yards per carry allowed at 4.1.

The Steelers are preparing to face the Miami Dolphins, a team that ranks in the bottom three in rush yards. Given that Miami is getting quarterback Tua Tagovailoa back from injury, their run game may be more effective than that ranking suggests, and Pittsburgh needs to be ready. Erasing Miami’s run game both gives the Steelers favorable time of possession and makes their offense one-dimensional. While the team made strides from its woeful run defense in 2021, it will need to continue doing so.