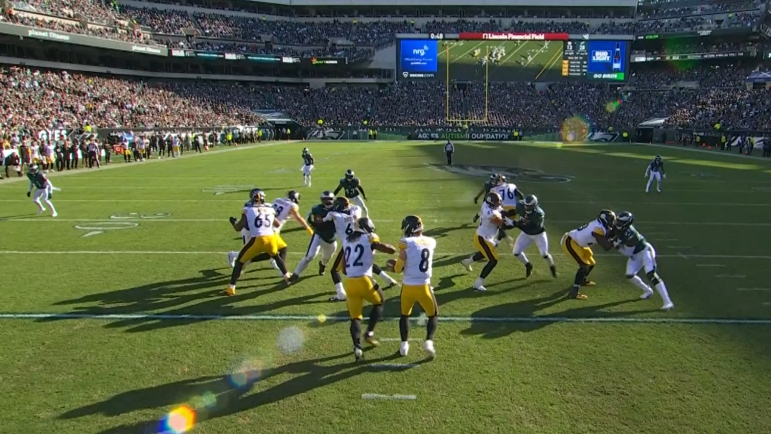 The Pittsburgh Steelers’ running game continues to be one of their many fundamental struggles. Against a Philadelphia Eagles’ defensive line that features All-Pro defensive tackle Fletcher Cox, 335-pound freak athlete Jordan Davis, and former Steeler Javon Hargrave, this was showcased in full force. When asked about stopping the Steelers’ run game early and making their offense one-dimensional, Cox stated that this was indeed the goal in a post-game press conference.

“That’s always the goal going into every game,” Cox said in a transcript provided by the team. “You’re trying to make a team one-dimensional and trying to make it easier for our defensive backs, our linebackers, really everybody who is playing on the back end. That way, no one is guessing [run or pass]. I think we did a good job in the first half. In the second half, we had a couple of leakage plays, but the most important thing is that we won the game. Guys flew around and tackled. Obviously we could have been better in some situations, but we got by and we’re looking forward to the next game and getting better.”

The Eagles’ defensive front indeed made the job easier for their defensive backfield. Steelers running back Najee Harris had no yards on his first four carries, and the team’s longest first-half run went for 12 yards from Jaylen Warren. As such, the defensive backfield was more than prepared for the passing attack, and held up well.

For the Steelers, having an abysmal run game is all but ideal for the development of rookie quarterback Kenny Pickett. Ideally, having a run game takes the pressure off Pickett and allows him to manage the game better. For the offense, staying ahead of the chains is vital, and the team seemingly never got more than two yards on the many all-but-unexpected runs on first down.

As Cox mentioned, however, the team’s running attack did find its footing in the second half. Draw plays to Harris and Warren produced good results, and Pickett got a few yards on the ground himself. That said, the game was out of hand at that point, and it is not the worst thing for the Eagles’ defense to allow run plays in that situation.

In his three full starts, Pickett has thrown for 38, 44, and 52 attempts. Simply put, this team will not win many games with such high attempts for the rookie, and the team is indeed 0-3 in those three Pickett starts. The only way to lower this number is by establishing a run game. As promising as the second-half draw plays looked, they are not a concept that this running game can thrive off of in all situations.

Running the ball is a big flaw for this team dating back to 2019. This is due to a myriad of factors, from blocking to schemes. If one thing is for sure, it’s that they will need to try something new, as their current philosophy has not yielded any results. As Pickett said in his post-game press conference earlier, it is insane to do something over and over and expect different results.