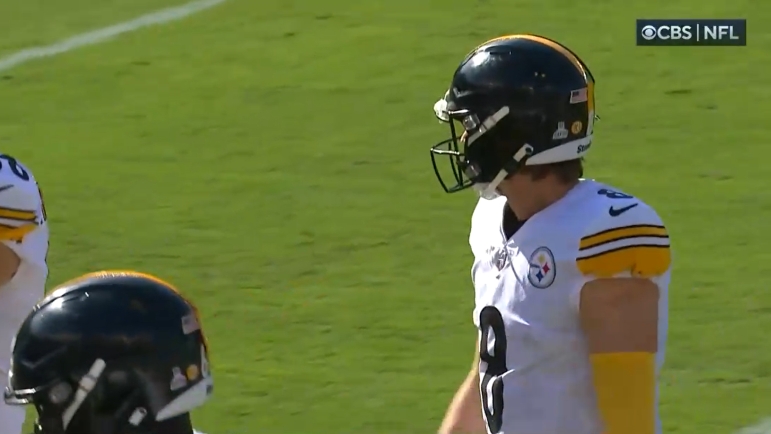 The Pittsburgh Steelers’ offense displayed yet another inept performance. After scoring 13 points against the Philadelphia Eagles, this is the team’s seventh consecutive game scoring 20 or less points. When asked what his message to the offense is after this loss, Pickett was clear in stating that something has to change.

“Somethings gotta change, right?” Pickett said in a post-game press conference according to the team’s YouTube channel. “It’s insane to do something over and over and expect something different. We’ve been having these problems all year, that has to get changed. We need to look each other in the eyes and get it turned around. We’re only gonna be able to do it, coaches can say what they want, fans can say what they want, but at the end of the day it’s up to us.”

The offense had much of the same script as the past few games. After putting together a touchdown drive in the first quarter, they did not get much going for the remainder of the game. From poor blocking to reluctance to take shots down the field, the struggles were all-around, and felt like groundhog day for how this offense has looked this season.

Indeed, the definition of insanity is doing something over and over and expecting different results. Outside of several trick plays and Wildcat formations, this offense did not appear like it made any adjustments from past weeks. The Steelers attempted first down runs that often did not result in any gains, as Harris had no yards in his first four carries.

It is getting harder and harder by week to see the glass half full with this offense. If there is any water left in the cup, the team did see success running the ball with draw plays and end-arounds. Additionally, tight end Pat Freiermuth had himself a solid outing as the team’s leading receiver, as he is proving to be a reliable target in the middle of the field.

This offense will get a chance to regroup and prepare for a home matchup against the New Orleans Saints, whose defense just pitched a shutout against a Las Vegas Raiders’ offense that features star receiver Davante Adams. In doing so, the other side of the ball will see the return of reigning DPOY T.J. Watt, more likely than not ameliorating the pressure on the offense to score points.

As Pickett rightly pointed out, the fans and coaches can say what they want, but it comes down to execution and trust, which they will have more time to improve on in the coming bye week.