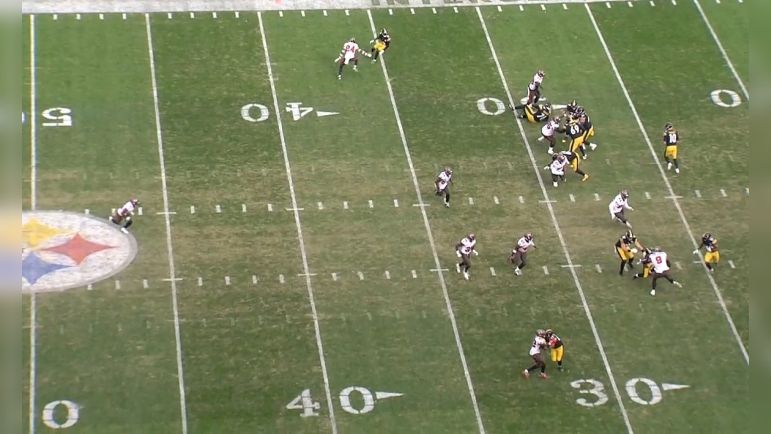 Sort of a wacky headline, I know. But it’s the old joke coming to mind when I think about the Pittsburgh Steelers’ offense.

The bad plays will continue until we can make them work.

I’ve been as hard on Matt Canada as anyone this year. To his credit, I thought he called a decent game against the Tampa Bay Buccaneers last Sunday. His opening scripts have been better, points the last two weeks, and against the Bucs, he had better spacing and route concepts to scheme guys open than he has. In those respects, progress, and I want to be fair and give credit when it’s due.

But then he does this. In our latest edition of beat-your-head-against-the-wall, Canada has called *this* play with only slight variation four times over the last two games, the Bills and Bucs contests. I’m not sure what you want to call it. Some sort of RPO, as you’ll see below. Really, you can just call it ineffective.

Let me just show you the play and we’ll briefly talk about it. Keeping this film room brief for all of our sanities today.

In terms of the actual play, the first is a sprint out that was batted down, the second a handoff to Najee Harris, the third is (supposed) to be a throw to Diontae Johnson, and the fourth is a give to Steven Sims that Tampa Bay easily figured out. There’s a lot happening on this play, but this has three to four basic components:

1. Throw to one-man route. One receiver, Diontae Johnson, running some sort of quick route. Curl/drag. Box count read but if there’s a favorable matchup, Pickett will throw it.

2. Jet to Sims. The motion man, as you see in the last clip, Pickett can hand the ball out on the edge.

3. Handoff to the RB. If the wrinkle of the play allows it.

4. Potentially, throwing back to Sims on the screen. Fake the jet to him and then hit him in the flat with blockers in front.

We could spend extra time debating the decisions and options on these plays – they should try to throw back to Sims once – but the bottom line is the bottom line. These have not worked for the offense. Four plays has netted -3 yards with the “best” example going for a quiet gain of two. Pittsburgh and Canada has tried to stubbornly outsmart the opposition, running the same call over and over to no avail. Some of the smartest Football Twitter minds, guys like Josh Cohen and Nate Tice, agree this offense is a trainwreck.

You have to wonder when they get scrapped from the playbook. Sims is out this weekend, and I imagine we won’t see it. Thank God for that.