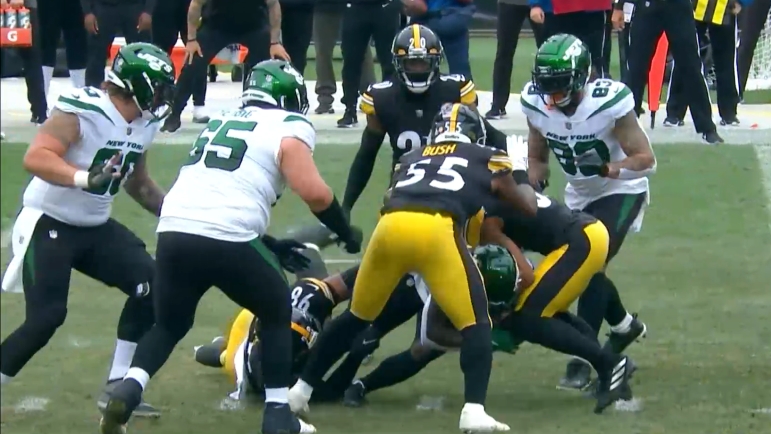 The Pittsburgh Steelers lost at home to the New York Jets Sunday 24-20. The offense received a spark when Pittsburgh opted to go with rookie QB Kenny Pickett in the second half, benching starter Mitch Trubisky. Pickett managed to score two rushing TDs and complete nearly 77% of his passes in a half of action and fellow rookie George Pickens also put together a breakout performance with six receptions for 102 yards in the contest.

However, one rookie that hasn’t received a lot of notoriety for his play on Sunday is third-round DL DeMarvin Leal. Leal played 27 defensive snaps and was credited with four combined tackles (two solo) and a tackle for loss. While this may seem like just an average day’s work for a defensive lineman like Leal, context is needed to understand how well he played given his role in Pittsburgh’s defense.

When T.J. Watt suffered a pec injury Week 1 against the Cincinnati Bengals, many wondered how the team would try and replace his impact as a pass rusher and steady play as a run defender on the edge. OLB Malik Reed was expected to be the man to step into the starting spot opposite Alex Highsmith, but the idea was floated around about having Leal kick out to the edge and play a hybrid DE/OLB role like he did at times at Texas A&M. The idea seemed unlikely at the time given that Pittsburgh had drafted Leal as a base defensive end, but the very next week, we saw Leal take snaps outside shade of the tackle out on the edge.

Leal played a majority of his snap Sunday on the edge for Pittsburgh, and frankly, he represented himself well there. He was stout against the run, being a handful for opposing TEs in the run game while playing sound run defense responsibilities by effectively setting the edge. Even when he went against some of New York’s best run blockers, Leal rose to the occasion. Watch as he sets the edge here and plays #78 Laken Tomlinson square to the LOS as he pulls, keeping his body in great position to go either inside or outside as he rips back inside to make the tackle on #20 Breece Hall with Highsmith.

When singled up with a TE on the edge, Leal really shined as a run defender. He notably added weight and strength to his frame to better hold up against the run which was an area of improvement he needed to address coming out of college. Thus far in 2022, he has done just that, especially in mismatches with smaller blockers like this play where Leal chucks #83 Tyler Conklin to the side to make a play on #32 Michael Carter near the LOS.

Here’s another rep where Leal gets the best of Conklin against the run, crashing down the LOS and sheds the blocker to the side as Breece Hall runs to the gap. Leal closes the hole off which forces Hall to cut back inside after getting bottled up, ultimately getting brought down by Myles Jack after he successfully sheds the block.

When facing TEs as a pass rusher, Leal took full advantage of that matchup to pressure the pocket and make Zach Wilson uncomfortable. On this play action pass, Wilson drops back to pass as Leal crashes inside on Tyler Conklin who is tasked with blocking the supersized edge rusher. Conklin gets help from #87 C.J. Uzomah, but Leal fights through the blocks as the pocket collapses, putting Conklin on his back as he gets tripped up and chases after Wilson who ends up throwing the ball away.

When left unblocked, Leal shows good pursuit to the football having the effort to get in on the play like he does in both clips here. Leal comes off the edge in backside pursuit of the ball and gets in on the action, hustling to the ball to get the assist on the tackle.

Even when he isn’t in-position to make the play, Leal continues to show great pursuit to the ball down the field. Watch Leal on this rep where he schools Tomlinson on the swim move over the LG’s left shoulder, clearing the block and tries to get on his horse to run down Zach Wilson from behind. He doesn’t quite get there, but Leal has the motor running hot from snap to whistle which is a trait you love to see in a near-300lb defensive lineman.

As you can see from the rep above, Leal flashed some pass rush upside in Sunday’s loss to the New York Jets. While not a traditional edge defender, Leal displayed quality hand usage coming out of college, being able to win with finesse thanks to having multiple tools in the toolbox. Check out this rep where Leal uses a two-hand swipe paired with a quick inside swim to school fellow rookie Max Mitchell who gets put through a spin cycle. Mitchell tries to box Leal out like a power forward with his backside as he gets stuck between the RT and RG, forcing Wilson to leave the pocket and throw the pass early which falls incomplete.

Here is another example of Leal pressuring Wilson in the pocket while rushing off the edge against the RT, hitting the cross chop and continues to fight through the block as he approaches Wilson, getting his hands up into the air as he attempts the pass which drifts out of bounds due to the pressure. #84 Corey Davis is wide open downfield, but Leal’s pressure does just enough to make Wilson throw an off-target pass.

Overall, DeMarvin Leal represented himself well Sunday despite playing a position that isn’t his best scheme fit given his measurables. Mike Tomlin spoke Tuesday stating that Leal did play in space while at Texas A&M, prompting them to try and give him some run there in the absence of T.J. Watt. The move proved to be a good one for Pittsburgh as Leal was sound as a run defender and generated some pressure as a pass rusher, forcing several incomplete passes that could have been explosive plays.

It wouldn’t be a stretch to say that Leal has outplayed OLB Malik Reed to this point on the edge for Pittsburgh, and Leal wasn’t out on the field in the fourth quarter when Pittsburgh surrendered two-consecutive scoring drives to the Jets.

While not a natural fit at OLB in Pittsburgh’s 3-4 base defense, Leal provides more consistency as a run defender and enough as a supersize pass rusher on the edge to continue to earn more reps on the outside while Watt remains sidelined. He saw his snaps almost double against New York compared to previous weeks, and his snap percentage should only increase as he feels more comfortable in Pittsburgh’s defensive system and continues to make an impact.

What are your thoughts on DeMarvin Leal’s performance against the New York Jets? Is he the best option for Pittsburgh on the edge opposite Alex Highsmith while T.J. Watt is out? Do you see his role increasing in the coming weeks? Please leave your thoughts in the comments section below and thanks again for reading!