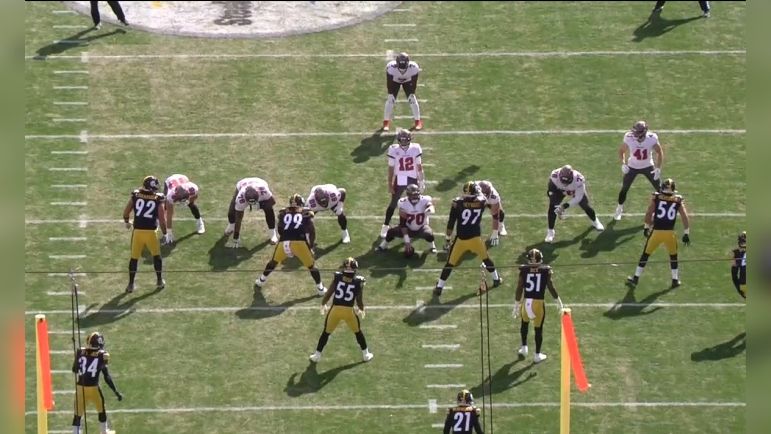 You know you’re a smart player when you can call out what the offense does before they do it. Cam Heyward’s as smart as they come. There’s plenty of examples but one in Sunday’s win over Tampa Bay stuck out in a big way. To understand that is to know the context of the play. Something we noted in our pre-game scouting report popped up early in Sunday’s game. In our offensive breakdown, we noted a tell/tendency the Buccaneers had with their run game. Here’s what we wrote:

“They do not have a FB but they will use blocking-specialist rookie Ko Kieft, #41, in-line and also in the backfield. The latter is often a signal for counter runs.”

On the first snap of Sunday’s game, the Bucs come out in 11 personnel with tight splits. Power run to the right/field side with the backside left guard and Kieft, aligned off-ball, pulling across. The Steelers string it out well, Alex Highsmith “wrong-arming” the puller with LB Myles Jack scrapping over the top (something they did all game) and Leonard Fournette is kept moving laterally for no gain.

Next drive. Bucs come out in 12 personnel with Kieft initially in the backfield. But he gets motioned out to that same wing position. And Heyward knows what’s coming. As soon as Kieft is motioned, watch Heyward immediately begin to point to his left, signaling Kieft and the BSG – the left guard – are going to pull. And Heyward was right.

Knowing that, Heyward also understands how the Bucs are going to block the rest of it. On gap runs where the guard is pulling, the center has to execute a “back block,” a tougher-than-it-looks down block on the defensive tackle to keep him from following the puller and blowing up the play. The center has to fire out hard to try and secure the block.

Heyward counters by swimming to the inside, the opposite direction the center is moving, to easily beat the block and move with the flow of the play. Heyward quickly sheds the block of center Robert Hainsey, clogs the middle, and forces Fournette to get off his track and run wide. Isaiahh Loudermilk, on the tight end in Pittsburgh’s over front, makes the tackle for just a one-yard gain.

Those are “not on the box score” plays. Heyward doesn’t get credit on the stat sheet but he made the play. He knew what was coming, he communicated it to teammates, he knew how to adjust, and he executed.

It’s just one example of Heyward’s incredible football IQ thanks to his work ethic and time in the league. As the scouts call it, his FBI (Football Intelligence) is as good as you’ll see. I’d call him one of the top ten smartest players in the whole NFL. Seriously. It’s that good.

He continues to play traffic cop in getting guys aligned and as we noted yesterday, he helped create three Buccaneers false starts. He is the complete player and after a nasty pass rush drought, got after the quarterback yesterday. But even during those lulls, he makes a ton of plays that go unnoticed. This is one of many.