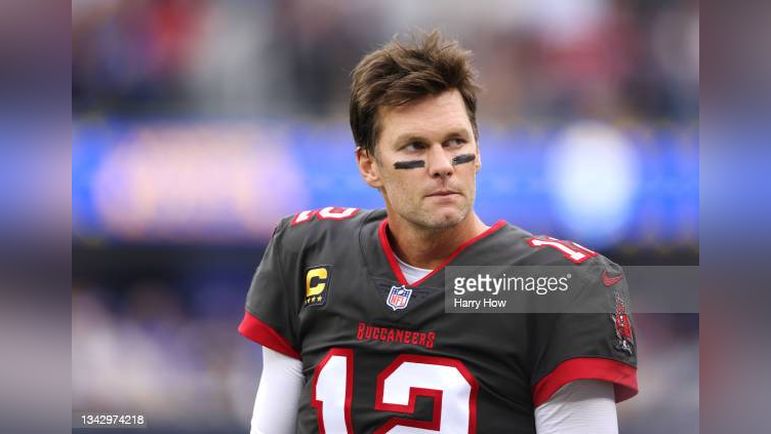 Tampa Bay’s run game has not been efficient this season, averaging just 3.1 YPC. That’s dead last in football. They also have just two rushing scores, next-to-last in the league. The Bucs have a defined runner in Leonard Fournette with 74 carries on the season, making up the vast majority of the totes. Rachaad White gets involved in the run game too but has only 16 carries and no one one really touches the ball out of the backfield. No WR runs or anything like that. Fournette is a downhill runner averaging just 3.8 YPC with a long of 17, stats similar to Najee Harris.

As a team, they have just ten runs of 10+ yards, tied for 26th fewest. So they’re a grind-it-out type of rushing attack.

Conceptually, they’re an inside zone and gap team, staple run-game concepts around the league and things we’ve written about many times before. While I don’t have exact data, in the tape I watched, the Bucs ran to the boundary side more often than I see other teams do. Meaning, they run to the same hash the ball is on. It means a bit less in the NFL than college, the pro hashmarks are more narrow, but most teams run to the field/open side because there is more space. A couple examples:

While this can apply for their run or pass game, the Bucs also are a “FIB” team quite a bit, meaning “Formation In Boundary.” Most teams align their formational strength to the field side because again, it offers more space. The Bucs are willing to align in the boundary. These are often 2×2 formations with the two receivers to the field with two tight ends to the boundary. An attempt to get best of both worlds, receivers in space, blockers in tight. An example. 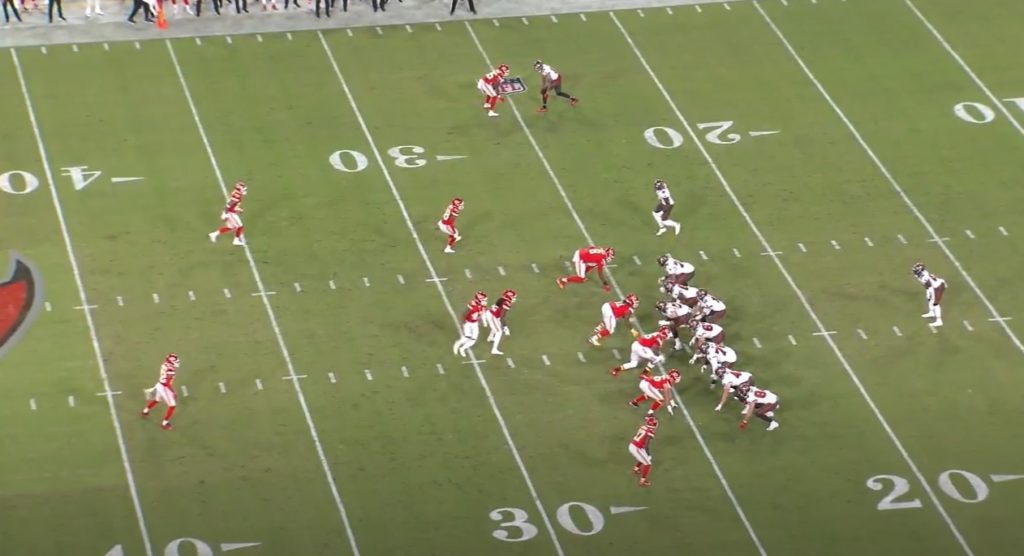 They do not have a FB but they will use blocking-specialist rookie Ko Kieft, #41, in-line and also in the backfield. The latter is often a signal for counter runs.

Some other offensive stats. They’re averaging just 20.6 PPG, tied 21st in football and have only scored more than 21 points once this year playing catch-up against the Kansas City Chiefs in Week 4. They’re 14th on third down at 39.7% and 17th in the red zone at 57.1% so pretty middling in situational football.

Led by Tom Brady. Different uniform. Same Brady. On the year, Brady is completing 68.1% of his passes, his highest mark since 2007, though his YPA is just 6.8, tied third-lowest of his career. Fewer vertical shots in this offense. Perhaps injuries are one reason. Perhaps Bruce Arians no longer being the head coach is a factor as well. As always, Brady is taking exceptional care of the football, throwing just one interception on the season.

Certainly one factor is RB Leonard Fournette being the team’s leader in receptions with 26 of them. Didn’t have that on my Bingo card. Russell Gage has 23 receptions at a very low clip of 7.5 per catch. Mike Evans and Chris Godwin have dealt with injuries but Evans is still a major threat, averaging 15.8 yards per catch with three TDs on just 20 total grabs this year. Injuries have influenced this but the Bucs’ offense spreads the ball around with seven players catching 10+ passes in 2022.

On the season, the Bucs have 15 completions of 20+ yards, tied for 16th in the league. Smack dab in the middle.

Conceptually, there seem to be fewer vertical concepts in this offense. It’s a little more watered down with all the new players being rotated in due to injury. The first thing that stuck out to me is Brady’s use of the middle of the field, especially in the red zone. That’s where he wants to hit the ball, between the numbers. Including moving Mike Evans inside.

Lots of 3×1 “nub” formations in the pass game with three receivers to one side and a tight end isolated backside. Steelers typically don’t travel corners but they have been doing more this year to avoid linebackers on tight ends, though their corners have looked uncomfortable out of the slot. Levi Wallace and Josh Jackson especially. Expecting the Bucs to show a lot of this Sunday. 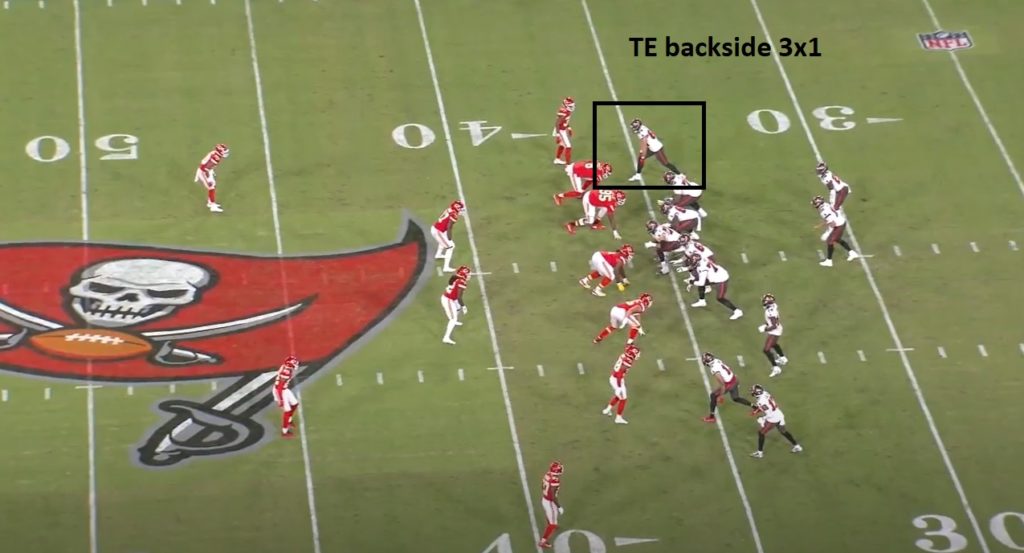 Fournette being the team’s leading receiver isn’t the product of a bunch of checkdowns, too. There seem to be dedicated plays to get him out in space or at least have the option of 1v1 chances. Example of Pony with a designed play to Forunette in the flat with the second being the two receivers to the top breaking in with Fournette releasing into the flat, now 1v1.

Good news is, this should be the last time the Steelers ever have to deal with Tom Brady on the field.

Still, for at least one final matchup, Brady still has it at 45 years old. Coming into Sunday’s matchup, the Buccaneers’ offensive stats don’t look great on paper. On film though, Brady can still cut it loose and has a ton of options to work with under offensive coordinator Byron Leftwich.

Through five games, the Buccaneers have scored just nine offensive touchdowns (two run, seven pass). On the year, Brady is averaging just 6.8 yards per attempt, but does sit third in passing yards on the season with 1,409.

For the most part, the Bucs are relatively one dimensional. Brady is still good enough to win that way though.

Having guys like Chris Godwin, Mike Evans, Russell Gage, Julio Jones and Scotty Miller to throw to out wide though certainly doesn’t hurt.

The connection between Brady and Evans is absurd. Evans remains one of the most dominant receivers in all of football and is starting to handle more of the Rob Gronkowski role this season, running more routes into the middle of the field.

Brady still has the arm talent to get the football deep downfield into the middle of the field between defenders too.

That will be a very tough matchup for the Steelers to slow down on Sunday, especially if guys like Ahkello Witherspoon, Cameron Sutton and Levi Wallace can’t go.

Evans is a sound route runner overall, has great hands and really can play through contact. He’s a deadly force in the red zone too.

Aside from Evans being the true No. 1 in Tampa Bay, Godwin is a special receiver in his own right. On any other team he’s likely the No. 1, but in Tampa Bay he’s the No. 2 that moves around and sees a lot of single coverage.

He and Brady have established quite the connection in recent years, and now that he’s back healthy from the torn ACL suffered last season and the hamstring injury suffered early in the season, the Bucs passing game is starting to take off.

Leftwich and Tampa Bay will move Godwin around a ton to get him into favorable matchups. Brady still does a great job getting him the football and allowing him to protect himself downfield.

Where Brady remains deadly is off of play-action. Even though the Buccaneers don’t run the football well, Tampa Bay remains a high-level play-action team. Brady is so good at selling run and then getting his head around to find open receivers, especially his tight ends.

Not only are the Bucs loaded at receiver, they’re deep at tight end too with veterans Kyle Rudolph and Cameron Brate holding down key roles, and rookie Cade Otton emerging as a Brady favorite in the last two weeks.

On play-action, he loves to hit Rudolph and Brate on out-breaking routes to the boundary, whether it’s an out route or a flag route.

Rudolph isn’t what he once was, but he is still able to get open and has reliable hands. Brate has emerged as a Brady favorite the last two years. He has good hands and always seems to find himself in a ton of space on his routes.

He’ll be a handful on Sunday.

In the backfield, the Bucs are leaning heavily on Leonard Fournette and rookie Rachaad White right now.

Fournette remains a good running back overall and is really adding some serious pass catching abilities to his resume. He’s become a go-to guy out of the backfield for Brady, while White is beginning to generate more and more trust and belief as the season goes on.

Tampa Bay doesn’t run the ball well. The Bucs sit second to last with 330 yads on the season. They don’t have a single rush over 20 yards and are averaging just 3.1 yards per carry, worst in the league.

Still, Fournette can be a problem.

He runs very well behind his pads and consistently falls forward. He’s not going to home run anyone right now, which is more of an indictment on the blocking than on his talents, but he will grind out yards and really wear teams down when it matters most.

White has great hands out of the backfield and is the type of guy to make defenders miss and home run you. The Steelers have to be wary of him in that third down role when on the field.

Up front, the Bucs have undergone significant changes due to free agency losses, retirement and injuries so far this season. Here’s how I expect them to line up left to right on Sunday:

The right side of the offensive line remains an elite one. Wirfs is arguably the best tackle in football with great feet and impressive strength. Mason remains a brick wall at right guard. He’ll stone people in pass protection and really gets a solid push in the run game.

The left side of the line is a question. Smith is dealing with an elbow injury on his right arm and hasn’t been the same in pass protection since. Something to watch for there. Goedeke is a former tackle in college turned guard and he’s still getting up to speed on the position and the speed and strength of interior guys in the NFL.

Hainsey has been solid and is getting better and better every week. He’s no Ryan Jensen, but he’s communicating well and has the trust of Brady, which means a lot for a young center.

On special teams, the Buccaneers remain as solid as they come.

Kicker Ryan Succop leads the NFL in point and is a steady presence in the kicking game for Tampa Bay, while rookie punter Jake Camarda has an absolute hammer for a leg. He struggles with consistency at times like all young punters do, but he’s also averaging 45.45 yards per punt with a long of 65 on the season.

Jaelon Darden will handle the punt return duties. He has a ton of speed, but hasn’t quite made the impact for the Buccaneers that they were hoping for when they drafted him two seasons ago.

White will handle the kick return duties, though Darden will get run there too on Sunday. White fumbled the opening kickoff against the Kansas City Chiefs in Week 4 which drew the ire of the coaching staff, but they haven’t quite lost faith in him.