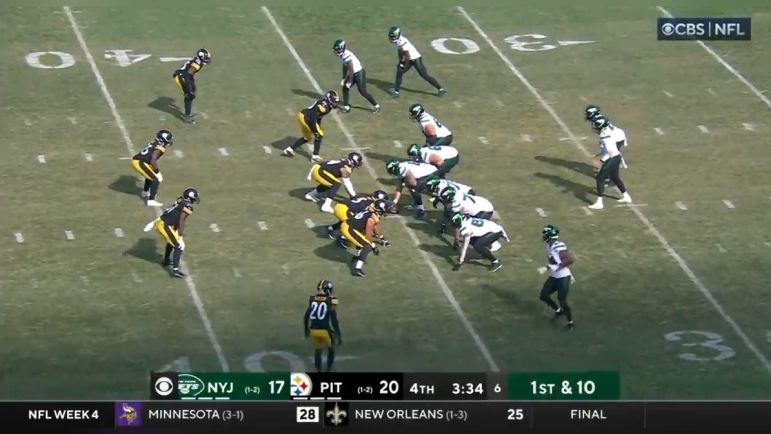 Sunday’s loss to the New York Jets was doubly painful for not only losing but blowing a ten-point lead to the New York Jets. At home, spoiling Kenny Pickett’s debut. The rookie quarterback coming off the bench, rallying the team, energizing the crowd, and winning the game is how it’s supposed to go. Losing isn’t part of the script.

While the Steelers’ offense had plenty of issues, scoring 20 points is still child’s play in the modern NFL, this loss is on the defense. They gave up a pair of 10+ play, 65+ yard touchdown drives in the fourth quarter and became their first such loss, blowing a double-digit lead built in the fourth quarter, since 2000.

So what happened? Like with virtually anything this epically bad, there were a combination of factors. In essence, injuries limited the Steelers’ personnel and coverage and the Jets tweaked their scheme for big plays. That’s what Mike Tomlin said in his Tuesday press conference.

“We sustained some in-game injuries and so forth in the secondary that made some of those possession downs challenging in terms of the things that were at our disposal,” he said Tuesday. “Obviously we went into the game down a couple of guys and then some things happen in the game. And when we looked at the tape, we just weren’t tight enough in those circumstances.”

From an injury standpoint, there were two that limited what the Steelers ideally wanted to do: CB Ahkello Witherspoon, who missed the game with a hamstring injury and SS Terrell Edmunds, concussed in the first half of the Jets’ game. To replace each man, Witherspoon and Edmunds, the Steelers kept Cam Sutton as an outside cornerback while Tre Norwood subbed in for Edmunds. What this did was limited Pittsburgh’s nickel and dime packages. When everyone is healthy here is how it’s supposed to look.

On run downs in nickel packages, Arthur Maulet works in a Mike Hilton role. A small linebacker who blitzes and plays the run hard. On pass downs in nickel or dime packages, he is subbed out for Cam Sutton. Maulet has a specific and niche role and is good at his job, playing downhill and attacking the run, but he is a liability in coverage. That’s why he doesn’t play on passing downs. If he has to flip his hips and run, he – and this defense is in trouble. So that’s what you have to know: Maulet is the “run down” guy. Last season, he and Tre Norwood rotated in the slot with Norwood being the “pass down” guy.

When Witherspoon got hurt, it kept Sutton to the outside. Maulet played in all nickel packages, including pass situations. Now that wouldn’t be a massive problem because the Steelers could’ve relied on playing dime on anything 3rd and 6+ and at least gotten Norwood on the field. In fact, the Steelers used their dime packages on three 3rd downs in the first half. The Jets completed just one pass and went 0/3 on those third downs, the Steelers’ defense doing its job.

That’s where the Edmunds’ injury comes into play. When he got hurt, it pushed Tre Norwood to SS. Which meant he couldn’t come on in dime packages – he was already out there. Based on the people the Steelers chose to play, the Steelers couldn’t go to dime packages. They were stuck in nickel. So this is how their nickel package looked against the Jets post-Edmunds’ injury.

Being stuck in nickel also meant the Steelers kept their two inside linebackers on the field in passing situations. So Pittsburgh has very few of its “pass personnel” on the field. Maulet is supposed to be off the field and Norwood is supposed to be a dime player, either over slot or sometimes rotating to safety to allow Minkah Fitzpatrick spin down and Pittsburgh still maintain two-high looks.

And the Jets took advantage. Zach Wilson went 10/12 in the fourth quarter with a touchdown and no interceptions after struggling through the first three quarters. One, they attacked Maulet, the Steelers’ “run game” guy stuck into passing situations. In “gotta have it” moments, the Jets went after Maulet, hitting WR Garrett Wilson for 35 yards and Corey Davis for 22 on third and fourth downs.

With limited personnel, the Steelers’ coverages were also pretty limited in the fourth quarter. They basically played two of them: Cover 2 or Cover 3? Robber with Fitzpatrick spinning down to try to “rob” crossing routes. But the Jets wised up, as Fitzpatrick said after the game, and began throwing away from the Robber. A pretty simple idea. Find #39. Throw nowhere near him. The completion to Davis above is one example. Here’s another one to Davis.

And again, this was done entirely out of nickel. The Steelers were in a bad grouping with the wrong personnel and got picked apart.

It may have also limited their blitz packages. Curiously, the Steelers didn’t blitz a single time in the fourth quarter. Despite struggling to get pressure, Pittsburgh rushed just their front four, two EDGE rushers and two down linemen, every single time. Pittsburgh may have been worried about exposing their already hurting secondary and didn’t want to send numbers, though it’s worth arguing sending pressure would’ve helped the secondary out. Not blitzing was probably a bad decision.

What else could Pittsburgh have done? They could’ve played one of their remaining outside corners, James Pierre or Josh Jackson, and bumped Sutton inside to replace Maulet. My guess is Pittsburgh didn’t want to play Pierre in crucial situations since he hasn’t seen meaningful game action in nearly a year and probably didn’t get many practice reps this week, running scout team instead of the defense’s gameplan. Still, the fact they chose to get cooked with Maulet instead of putting Pierre on the field says a lot about what they think of him.

To recap, the loss of Witherspoon kept Sutton outside instead of playing the slot in nickel. And Edmunds’ injury prevented the team from playing their dime defense.

None of this excuses the Steelers’ collapse. They were awful and there’s no “allowable” reason for it to happen. They needed to make plays and didn’t, both rush and coverage. But this was a good time to explain what happened and how the injuries altered what Pittsburgh normally does. It’s the reason why the collapse occurred.