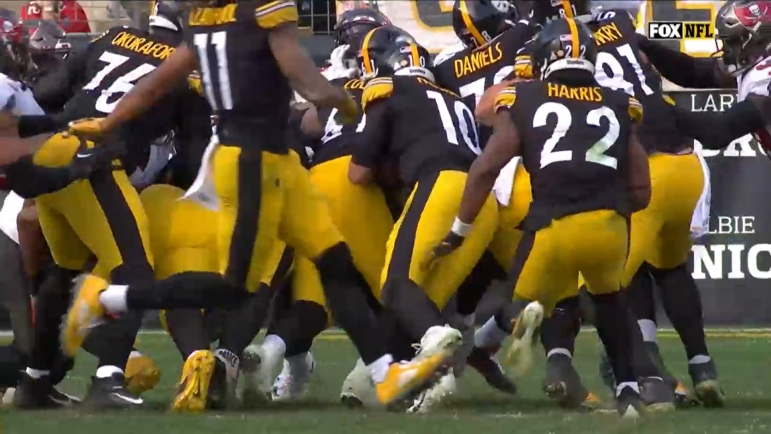 It is true, and correct, that rookie quarterback Kenny Pickett gets credit for yesterday’s win. It’s also true and correct that he deserved it. Yet that doesn’t make it any less true that he almost surely doesn’t get that win without the huge assist from his backup, Mitch Trubisky, who played quite well in relief after Pickett was forced out of the game due to a concussion.

Trubisky began the 2022 season as the Steelers’ starting quarterback but was benched at halftime in game four due to very underwhelming showings. While it hadn’t been said publicly, the general sense was that he was playing not to lose his job—and that perhaps might be what lost it for him. He played with abandon yesterday, and his receivers took notice.

“He was hungry. I feel like he was playing like he had something to prove”, wide receiver Diontae Johnson told Josh Rowntree of 93.7 The Fan. “He did that. He had a lot on his shoulders, and he didn’t let nothing shake him when the crowd was making noise and whatnot, trying to keep his head in there, don’t listen to the crowd and whatnot, just stay in the game and stay poised when you’re in the pocket, and he showed that”.

Coming into the game with about a quarter and a half left to play, Trubisky completed nine of 12 pass attempts for 144 yards with one touchdown, the first of the season to a wide receiver, finding Chase Claypool for what at the time was a 20-12 lead.

Trubisky inherited a 13-12 lead by the time Pickett was injured on a first-down play, but the Tampa Bay Buccaneers finished the game with 18. Tom Brady and company was able to score on the Steelers’ defense after the touchdown to Claypool, getting into the end zone, but an excellent play to break up the pass on the two-point conversion attempt helped preserve the win.

Yet that’s not where the game would’ve ended. There was still a substantial amount of time left to be played, over four minutes, and the Steelers managed to keep the ball out of Brady’s hands for all of that time, even with the Buccaneers still having timeouts remaining.

It wasn’t without significant effort. Trubisky actually faced numerous adverse down-and-distance situations and somehow continually came through, typically finding Claypool in the clutch. On that final drive alone, the duo that the fanbase wanted traded connected on a 17-yard conversion on 3rd and 15 and a 26-yarder on 3rd and 11.

And yet third down was probably where he struggled the most while in the starting lineup. Suddenly he was playing with the Madden cheat codes. There’s no doubt that he came into this game with something to prove. Johnson is right that he played that way. And he’s also right that he showed it.

Now, does that mean that he’s won his starting job back? No, or at least I highly doubt it. But he’s certainly helped return to the coaching staff and the locker room whatever confidence may have been lost in him.