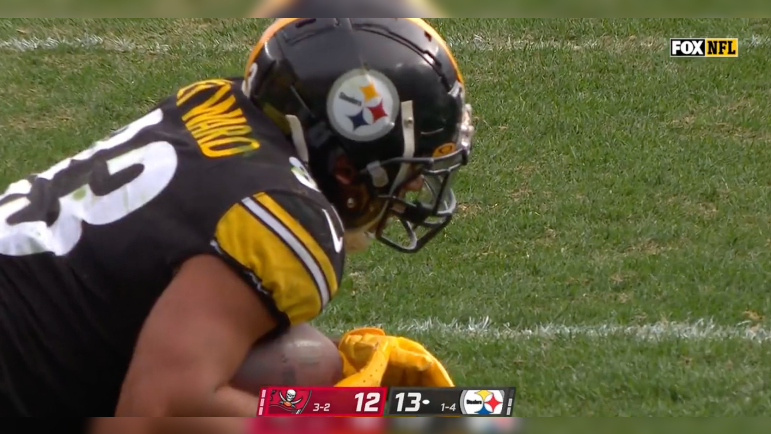 Coming into the Week 6 matchup against the Tampa Bay Buccaneers, the Pittsburgh Steelers were just one of two teams in the NFL that did not have a single play of 40+ yards, let alone a pass play of 40+ yards, sitting tied with the Arizona Cardinals for that lowly stat.

Thanks to rookie tight end Connor Heyward and backup quarterback Mitch Trubisky in the fourth quarter, that all changed for the Steelers.

Trubisky, catching the Buccaneers in a substitution, wisely went uptempo on the play and snapped the football with Tampa Bay defensive tackle Vita Vea trying to get off the field, resulting in the too many men penalty on the Buccaneers. He wasn’t done there though, scanning the field and finding the rookie Heyward leaking up the seam wide open, resulting in a 45-yard catch-and-run that ultimately set up Trubisky’s six-yard strike to Chase Claypool for the touchdown.

After the game, in which the Steelers were able to run a four-minute offense and grind out the win, Trubisky spoke highly of Heyward’s heads-up play and the job the offensive line did in the free play situation, resulting in the double explosive play from the rookie tight end in a critical spot on 3rd and 6 near midfield.

“I knew we had 12 guys on the field, so it was a free play. I was really just trying to scan the field again,” Trubisky stated to reporters after the win, according to video via the Steelers’ official YouTube page. “The OL did a good job; they knew it was a free play by just continuing to block and give me time. They [Tampa Bay] really weren’t set, and he [Heyward] was free down the seam, so he made a great, heads-up play just turning, getting ready for the ball and making a great play for the team.”

Connor Heyward with the longest play of the year for this Steelers’ offense! 😱 pic.twitter.com/OnFt4U9AaH

That’s when Trubisky went tempo realizing the Bucs were substituting, resulting in Vea trying to get off the field unsuccessfully. From there, the Bucs had a breakdown in coverage, resulting in Connor Heyward being wide open up the seam, setting up an easy throw from Trubisky to the rookie tight end.

Heyward did the rest, weaving his way from the catch at the 43 all the way down to the Tampa Bay 11-yard line, putting the Steelers in great position to put much-needed points on the board, leading to Claypool’s touchdown two plays later.

The rookie had a massive opportunity in front of him on the day with Pat Freiermuth out, and he delivered in a big spot for the black and gold.