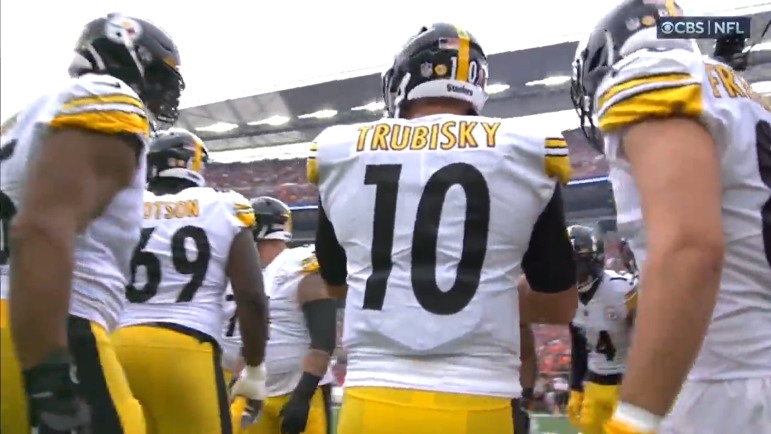 Close the door on any quarterback controversy. Kenny Pickett remains the Pittsburgh Steelers’ starter. But if the team needs to again turn to Mitch Trubisky, they’re confident. Speaking to reporters Thursday via a team transcript, OC Matt Canada discussed Trubisky’s play and role.

“I think we just watched it,” Canada said when asked about confidence in him, referring to Trubisky coming off the bench Sunday. “I think our confidence is very high. He came in, we kept rolling the ball and he kept making plays.”

Trubisky replaced Pickett shortly after halftime in Sunday’s win, providing a spark to the Steelers’ offense just in the way Pickett created one subbing in for Trubisky in Week 6. Trubisky was excellent in situational football, repeatedly moving the chains on third and long, converting in the red zone, and using his legs to extend the play or run with the ball. He finished the day 9/12 for 144 yards and a touchdown, leading Pittsburgh to a critical upset win over the heavily-favored Tampa Bay Buccaneers.

It was his first game action since being benched at halftime during Week 4’s game against the New York Jets, one where he reportedly got into a shouting match with WR Diontae Johnson, though it’s unclear if that’s the reason why Mike Tomlin pulled him. Still a team captain, Trubisky has said and done all the right things, though he was understandably frustrated following the Jets game. As he and the team have done throughout this entire process, Canada praised Trubisky’s approach.

“He’s been an ultimate pro through the whole deal. He’s working extremely hard, and his performance shows he was ready to play. It wasn’t like he wasn’t acting like he was going to play, or he wouldn’t come in and play as well as he did. He knew exactly what to do, where to go with the ball, protections, checks, everything that he has to do at that position that you don’t get reps at doing.”

Trubisky commanded the offense, effectively using tempo and capitalizing on defensive miscues, like on his 45-yard completion to Connor Heyward when Tampa Bay was trying to make a substitution. Despite his solid play, assuming he clears concussion protocol, Pickett will start Sunday night against Miami. Tomlin made that choice loud and clear during his Tuesday press conference. It’s the right move. The team turned to Pickett, and until they have an overwhelmingly good reason to turn back, they won’t. If all goes well, or at least well enough, Trubisky will serve as the team’s #2 QB the rest of the season, and will likely be playing elsewhere in 2023.