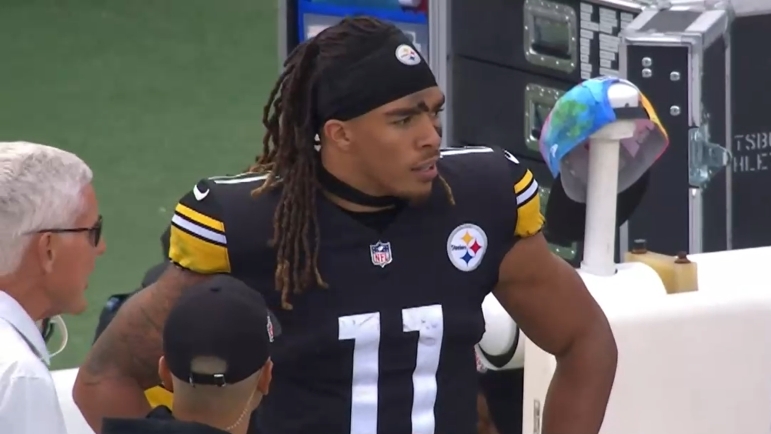 There hasn’t been much focus on WR Chase Claypool’s best game of the year, a seven-catch, 96-yard, one-touchdown performance that included several clutch third-down grabs. Instead, his name has been linked to trade rumors two weeks ahead of the NFL’s deadline. In a recent interview with Tide via Instagram, Claypool said he’s done his best to ignore the outside noise.

“I don’t think that just the energy, you know, is not well spent,” Claypool said as transcribed by The New York Post’s Jenna Lemoncelli. “If I were to pay attention to this, one of my former coaches texted me, he said, ‘Go Bears.’… That was the only thing that I kind of looked up.”

There’s no additional context to that Bears comment. Chicago certainly needs receiver help, Justin Fields is throwing to Darnell Mooney and not much else, but there’s been no credible reporting the 2-4 Bears are looking to buy at the trade deadline. Nor are there currently any indications the Steelers are looking to sell. The rumors stem from ESPN’s recent trade deadline article mentioning Claypool being available this preseason and the Green Bay Packers looking for receiver help now (a separate Thursday Twitter “report” isn’t credible and should be ignored). With a contract that runs through next year, Claypool would be more than a rental but his rookie deal makes him affordable for teams.

Coming off an upset win over Tampa Bay, it’s doubtful Pittsburgh is currently in selling mode. Another underdog victory this Sunday night versus Miami would completely revive their season and wouldn’t make the Steelers want to trade away any assets. The next two weeks will chart the Steelers’ path. Win at least one of these next two and the team likely doesn’t sell. Drop the next two and Pittsburgh may be more willing to make a deal. Rookie WR Calvin Austin III could return to the field over that span too, providing insight, albeit limited, on who they have to potentially replace Claypool out of the slot.

Claypool said his heart is in Pittsburgh but he’ll play for whoever wants him the most.

“If the team who wants me or a team who feels like I’m most valuable, that which I believe is the Steelers, then I’ll be more than happy to be playing for them.”

On the year, Claypool has 23 receptions for 225 yards, a 9.8 yard average, with one touchdown. Overall, his numbers are done, especially his average. Over his first two years, it was above 14 yards per reception. Now, it’s under ten. He’s second on the team in receptions and third in yards, the latter trailing Diontae Johnson and George Pickens.