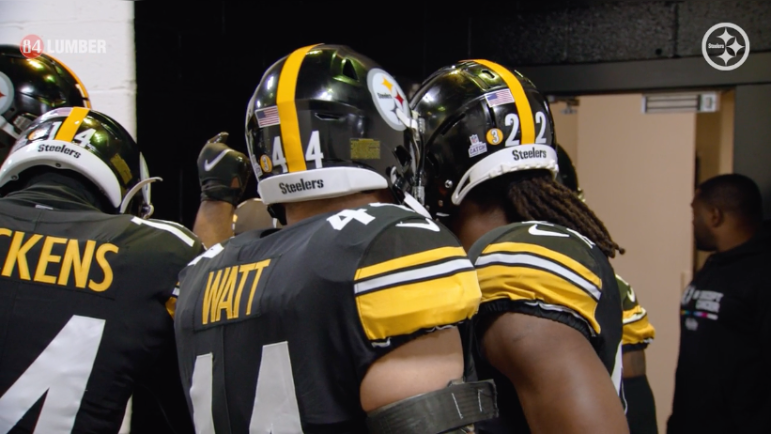 It said quite a bit about the leadership level and overall outlook of second-year Pittsburgh Steelers running back Najee Harris that he was named a team captain so quickly into his tenure in the Steel City.

Honored to be named a captain in just his second season, Harris has seemingly taken on that veteran leadership role offensively alongside backup quarterback and fellow team captain Mitch Trubisky and fourth-year wide receiver Diontae Johnson. That leadership continued ahead of the Week 6 game against the Tampa Bay Buccaneers at Acrisure Stadium.

Harris was caught by Steelers cameras calling the offensive playmakers together inside the tunnel, challenging them to play better in a must-win game for the black and gold.

“Hey, this group right here? We gotta play better, bruh,” Harris said to the playmakers, according to a clip from a one-on-one session between Missi Matthews and Chase Claypool on Steelers.com. “Zero, point, blank. It starts with us.”

After the game, Harris told 93.7 The Fan’s Jeff Hathhorn that he challenged the group, and believed that they lived up to the challenge.

“I said this group right here, we have to step up and make plays”, he said to Hathhorn. “No matter what the circumstances are, we have to play better. I think we lived up to that.”

Though the overall numbers in the Week 6 20-18 win over Tampa Bay weren’t that impressive from the playmakers, they made the plays when it counted most, especially Claypool, who told Matthews he appreciated Harris’ challenge, adding that it just gives the group energy running out onto the field.

Claypool, to his credit, was the best of the bunch Sunday, finishing with a game-high seven receptions for 96 yards and a touchdown. When rookie Kenny Pickett was in the game, Claypool touched the football three times, hauling in receptions of fourteen and six yards, adding an eight-yard run on a jet sweep.

Once Pickett exited with an injury early in the third quarter, Claypool upped his game with Trubisky in the lineup, adding five receptions for 76 yards and a touchdown, taking over down the stretch. That energy he provided helped him answer the challenge from Harris pre-game, adding to Matthews in the one-on-one session that he appreciates Harris’ leadership style.

“Najee does a good job kind of highlighting what we need to do in the game,” Claypool stated to Matthews, according to video via Steelers.com. “He’s lived through a lot of football experiences, going to ‘Bama, being able to understand big games. Even though this was our sixth game, it was a really big game because it was really a must-win.

“It just gives you that energy when you walk out the tunnel right before the game; it’s a perfect little pre-game speech.”

That speech from Harris pre-game paid off down the stretch, especially with Claypool.

.@ChaseClaypool with an incredible grab 🤯

It’s always great to get a look behind the scenes of the players right before the game. The clip of Harris’ pre-game speech was an example of that. It wasn’t some profound speech, but it was short, sweet and too the point, challenging everyone within the play-making group to step up in a big spot.

They did, especially Claypool.