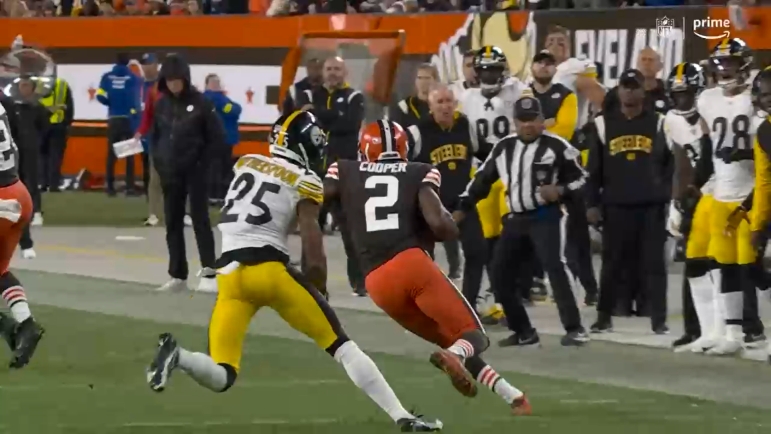 As the Pittsburgh Steelers prepare to take on the Miami Dolphins Sunday night down in South Beach, the defense is paying particular attention to the speed that Miami has as with their skill position players.

WR Tyreek Hill was traded to Miami from Kansas City this offseason, providing the Dolphins with possibly the fastest in-game player in the league that has a knack for taking the top off the defense and burning angles of pursuit from defenders playing chase after he has the ball in his hands. The Dolphins also drafted WR Jaylen Waddle sixth overall in the 2021 NFL Draft, complementing Hill with a dynamic weapon who accelerates quickly from the snap of the ball, getting up to top speed in a hurry to put stress on opposing defenses.

Along with Hill and Waddle, the Dolphins boast TE Mike Gesicki, who is recognized as one of the most athletically gifted TEs in the league, as well as RBs Raheem Mostert and Chase Edmonds, who are dangerous out in space with the ball in their hands.

CB Ahkello Witherspoon was asked about defending the deep ball against a potent Miami passing attack this week and the speed they bring to the table, and Witherspoon recognized the matchup issues that Miami’s skill position players pose on their defense, but also knows that the deep ball is a part of every offense’s playbook.

“I think that’s the expectation every week in the NFL,” Witherspoon said to the media Thursday in the locker room on video from Chris Adamski’s Twitter page. “I mean, that’s one of the home run balls in this game and I think that’s our job to come in week-in and week-out with an understanding of that and even more so of an emphasis when we’re playing the Dolphins.”

Here he is talking about the Dolphins’ speed and weapons on offense: pic.twitter.com/Th5jx47kkS

Witherspoon is correct in saying that any NFL team can use the deep ball to their advantage to stress opposing defenses and try and pick up chunk plays. However, some teams in this league are better than others at connecting on the deep ball, case-in-point how Pittsburgh has struggled to stretch the field vertically for the last few seasons, but a team like the Dolphins appear to pick up multiple 20+ yard receptions on a weekly basis.

Still, Witherspoon sees the tall task that the Pittsburgh secondary will have matching up with the Dolphins’ WR core, as Pittsburgh doesn’t have a lot of long speed at CB. Witherspoon has the best timed 40 speed on any of Pittsburgh’s regular starters at CB, clocking a 4.45 40 at the NFL Combine back in 2017. Still, Hill and Waddle are much faster, meaning that Witherspoon and the rest of the Steelers’ defense must emphasize keeping a lid on things to prevent getting beat over the top.

Look for S Minkah Fitzpatrick to play a lot of help on the back end to avoid leaving Pittsburgh’s CBs on an island in this matchup, as they do their best to prevent Miami from getting the big play Sunday night in primetime.