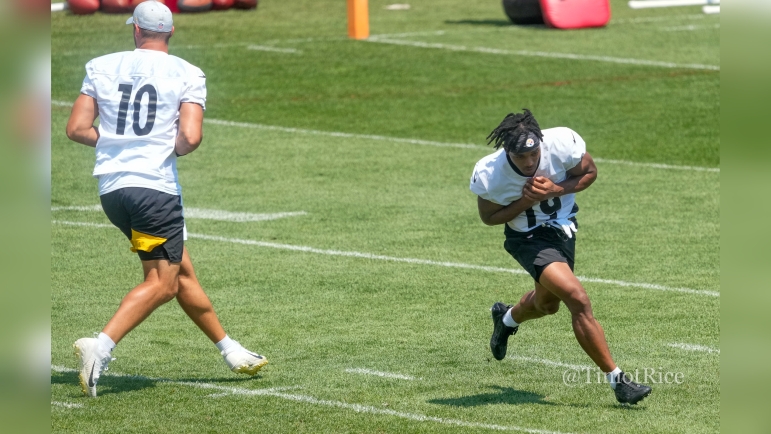 Explanation: Head coach Mike Tomlin acknowledged yesterday that rookie quarterback Calvin Austin III, who has spent the first four weeks of the season on the Reserve/Injured List, is now eligible to practice and to open his 21-day activation window. He did not say that they will be opening the window right away. He also didn’t say that they wouldn’t.

In terms of answers, I don’t think Tomlin gave us much to go on. “He’s eligible to come off this week”, he said, noting that him practicing “starts his 21-day window. The quality of his work and what he’s able to do oftentimes determines what you do from there”.

However, it is notable that Tomlin wasn’t asked specifically and exclusively about Austin, although he was mentioned by name. He was asked about the players on IR generally, and Damontae Kazee was also mentioned. If I’m not mistaken, though, only those two players would qualify for return other than T.J. Watt, who isn’t eligible to come off until next week.

But add in the situation at returner and it makes Austin practicing less surprising. Tomlin very much left open the possibility of Steven Sims taking over return duties, which would probably make Gunner Olszewski inactive.

But there has to be a roster spot for Austin to take. Unless Tomlin cuts Olszewski, or Sims, there isn’t a spot for him. He said on cutdown day that all seven wide receivers were deserving of a spot on the roster, but that doesn’t mean there’s room for all seven.

If Austin were to be added to the 53-man roster right now, he wouldn’t be dressing, so there’s little incentive to get him practicing before they have a role for him, or at least an opportunity for one. It’s reasonable to believe that they’ll want to give it a few more weeks to let the wide receiver position sort itself out, especially amidst the transition at quarterback to Kenny Pickett.