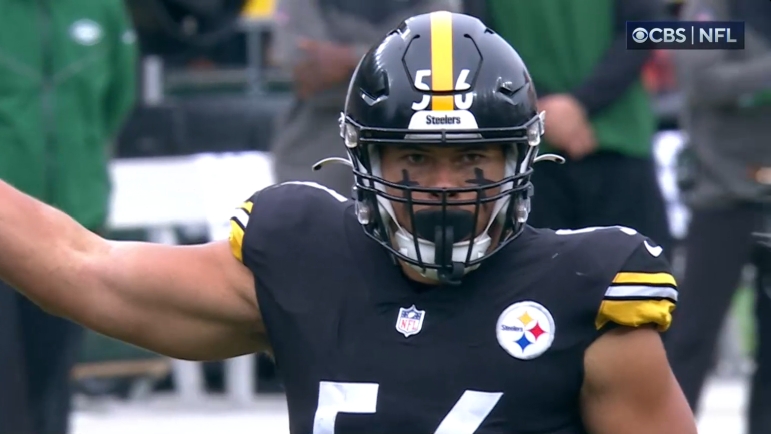 Four games into the 2022 season, Pittsburgh Steelers OLB Alex Highsmith is already halfway to the goal he set for himself prior to the season.

As soon as the 2021 season ended, Highsmith made it known that he wanted to hit the double-digit sack mark, a goal he set for himself last season, but fell short of having logged six QB takedowns last season. Thanks to an impressive Week 1 where Highsmith logged three sacks against the Cincinnati Bengals, he is well on his way of crushing ten total sacks on the season as he currently sits at 5.5 sacks through four games.

Film Room: Alex Highsmith Has Breakout Performance Against The Bengals

While Highsmith’s pace has slowed down some since his running mate T.J. Watt suffered a pec injury that resulted in him going to IR, he still has remained productive as a pass rusher, logging 2.5 sacks in the last three games, of which Pittsburgh has only gotten home to the QB three total times in that span. Highsmith currently ranks second in the league in sacks only trailing 49ers DE Nick Bosa with six, ranking first in sacks in the AFC.

One fun stat recently provided by former site contributor Daniel Valente put Highsmith in rare company in Steelers history that even Watt can’t claim to be in. Highsmith is only one of two players in Steelers’ history to have notched at least 5.5 sacks in the first four games of the season. The only other Steeler to have accomplished that feat? James Harrison.

Only two players in Steelers’ history have recorded 5.5 sacks through four games:

Pretty good company for Highsmith to be with.

Harrison recorded 16 sacks in 2008 along with 101 total tackles 16 TFLs, seven forced fumbles, three PBUs, and an INT. He was named AP Defensive Player of the Year for his efforts and made one of the greatest plays in Super Bowl history against the Cardinals with a 100-yard INT return TD right before the half, helping Pittsburgh bring home it’s sixth Lombardi Trophy.

James Harrison picks off Kurt Warner and returns it 100 yards for the TD, with time expiring in the 2nd quarter….

The Steelers rewarded Harrison with a 6-year, $51.75 million contract extension after his 2008 season. While Highsmith may not be in-line to make any game-changing plays in the Super Bowl like Harrison did back in 2008, he is playing himself into a hefty pay raise should he keep up the production through the rest of 2022.

Pittsburgh will have to make the decision to pay him alongside Watt likely before the start of the 2023 season, but Highsmith would be more that deserving based on what he’s accomplished thus far and his current trajectory in terms of development. He recorded two sacks as a backup behind Watt and Bud Dupree as a rookie in 2020 and notched six in his first season as a full-time starting player on the edge including 15 TFLs. He has almost surpassed that here at the quarter mark of 2022, displaying a similar trajectory that Harrison did prior to his breakout 2008 campaign where he recorded 8.5 sacks the season before and only three in 2005 after being only a part-time contributor with zero sacks in 2006.

This isn’t to say that Highsmith is on his way to DPOY honors in 2022 or is becoming the next James Harrison, but rather that he is experiencing a similar progression that Harrison went through early on in his career and is in-position to leverage his hot start into a big payday like Harrison did over a decade ago. Seeing as Pittsburgh is normally a team that likes to develop and re-sign their own, we could very-well see Highsmith ink a big long-term extension with the Steelers at some point after the season to keep the dynamic duo of him and Watt together for years to come as they terrorize backfields and hunt down opposing QBs.

What are your thoughts on Alex Highsmith’s start to the season? Do you think that he is playing himself into a nice payday heading into his contract year in 2023? Do you see some similarities between his situation and what Harrison did back in 2008? Please leave your thoughts in the comments section below and thanks again for reading!