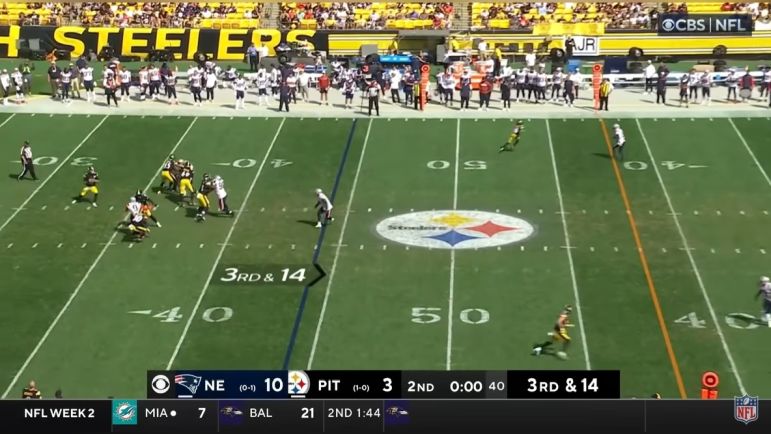 Steelers’ Nation has been a restless bunch already. Understandably unhappy with the team’s play, an uninspiring 1-2 start with one of the blandest offenses in football, the boo birds came out in the Steelers’ lone home game against the New England Patriots. So did the Kenny Pickett chants. While less veteran coaches may be swayed by outside pressure, Mike Tomlin takes it in stride.

Speaking during his weekly Tuesday press conference, Tomlin was asked about hearing disgruntled fans as the team finds its footing.

“Our fans are not an issue, man,” Tomlin told reporters. “We love our fans and the enthusiasm that they bring. We’re not gonna make that a negative. They care and that’s an awesome thing.”

Evaluating quarterback play is something some Steelers’ fans have never experienced before. For nearly two decades, Pittsburgh had an unquestioned starter in Ben Roethlisberger. Now, they enter a new chapter with Mitch Trubisky who through three games generally looks like the same Trubisky he was in Chicago. Decently athletic, can occasionally make a nice play, but inconsistent and not a stable, long-term option. The reality is Kenny Pickett will eventually become the Steelers’ starter. It’s just a matter of when and for fans, they want that to happen sooner than later.

Tomlin has served as the Steelers’ head coach since 2007 and been through basically every obstacle except a quarterback controversy. In pockets of time, he’s had to wrestle with quarterback decisions ranging from Dennis Dixon to Mike Vick to Mason Rudolph/Duck Hodges. But this is something different, more permanent and consequential and no comfort of “Roethlisberger will return” like in past years. But Tomlin’s been around the block long enough to block out the noise and won’t be influenced by those outside the organization. Though that may feel true for any head coach, greener head coaches in less stable organizations would feel that pressure. Not in Pittsburgh.

What fans are realizing is Tomlin has more patience with Trubisky than people think. He won’t panic, he won’t make a quick reaction. Trubisky will be the team’s starter until the very moment he isn’t and then the team will turn to Pickett. My preseason prediction was that Trubisky starts the first 14 games of the year and that’s still a real possibility.

Still, until the offense improves, the fans displeasure will continue.