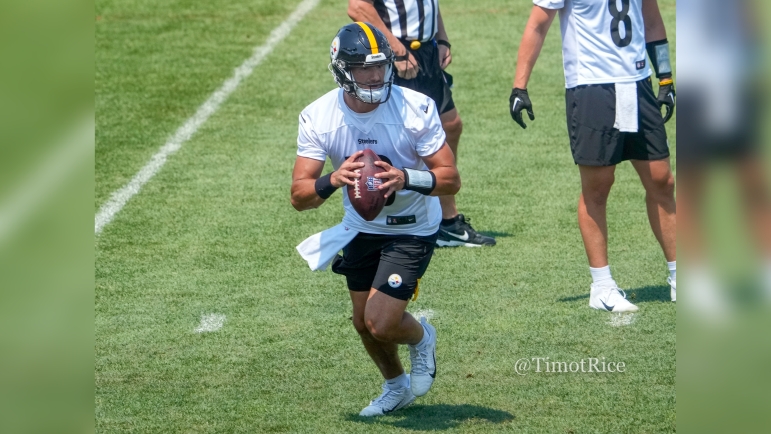 Bringing back a season preview I began last year with my 2022 Pittsburgh Steelers’ season stat predictions. My best guesses as to how this year will look as realistically as I can project it. We got some things right last year, like Ben Roethlisberger’s completions/attempts, Najee Harris’ yards, and my season projection being almost 100% on the money. But we had a fair swing of misses too like Roethlisberger’s touchdown numbers, Harris’ reception stats, and overestimated Minkah Fitzpatrick’s interceptions.

Here’s my best view of how things will look when the season ends. Let me know your thoughts in the comments below.

Numbers might not seen all that impressive. That’s a feature, not a bug. I’m projecting this team to throw the ball less this season and probably top out around 4000-4100 total yards and even that might be a little generous. Trubisky starts most of the season with Pickett seeing spot snaps and some time at the end of the year. Trubisky with a lower completion percentage and higher YPA while Pickett is the inverse.

Big year for Harris, who will be even more of a workhorse back than he was a year ago, though it’s still heavy volume to prop his numbers up a bit. Nothing behind him is all that notable, though receivers like Olszewski could have a presence in the run game.

Numbers may not look spectacular for any one player. But fewer pass attempts and good talent across the board stifles any one player’s overall production. Johnson’s YPC will increase in this offense while Claypool’s could dip a bit working more out of the slot. Pickens should be a downfield machine while I’m confident Freiermuth’s YPC will crack 10+ after barely being above eight as a rookie. Harris’ receptions come down while Olszewski has a decent season as a rotational slot receiver. His numbers could be a bit higher than this. Have a feeling Heyward will catch a bunch of passes in the flat. They’ll utilize his athleticism and hands.

I’ll stick my neck out and say Watt breaks the official single-season sack record. It’s a lofty goal but if anyone will do it, it’s him. He had 22.5 in essentially 14 games last season and caught some bad breaks along the way. He’s improved his sack total every season of his career and that streak continues here. Highsmith sets a career-high while Wormley’s numbers come down, losing snaps to Ogunjobi. Expecting to see safeties blitz more this year, including Fitzpatrick. 57 total sacks from these names. I refuse to give up on my hope to see 60.

Fitzpatrick returns to statistical form with six interceptions. He’ll be more unlocked this year than last. Wallace has picked off exactly two passes each of his last three years so I’ll make that streak four. One of these defensive linemen is bound to bat down a pass and pick it. Heyward’s that guy this year.

You’re not going to like me. Predicting 8-9 and a third-place finish in the AFC North behind the 11-6 Ravens and 10-7 Bengals but ahead of the 7-10 Browns. No playoffs here, obviously. Shaky offensive line and volatile quarterback play isn’t enough to compete in the AFC.