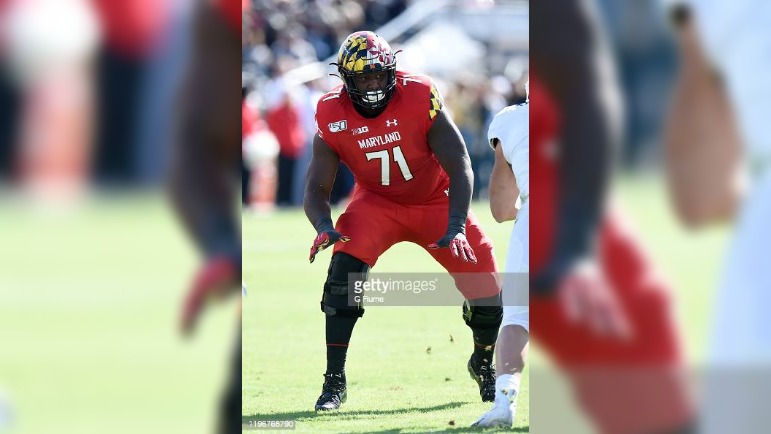 With college football in full swing, the scouting process has picked up for NFL teams and the national media alike. Mock drafts are being posted daily concerning a draft that won’t take place for another eight months, along with lists of risers and fallers after a single week of play.

However, there is some value to these postings this far out from the actual draft as these pieces provide us with potential names that could be a good fit with different NFL teams based on their need at the position as well as the prospect’s overall talent.

Kyle Crabbs of The Draft Network recently put out a fresh mock draft after the conclusion of this weekend’s games in college football, having the Pittsburgh Steelers slated to pick 11th overall and select Maryland OT Jaelyn Duncan.

“I thought about drafting a cornerback here, but for Kenny Pickett and Najee Harris to be their best versions of themselves, they’re going to need to make sure the offensive line is operating at a high level,” Crabbs said. “The team liked Dan Moore and Chuks Okorafor enough this past offseason to skip addressing the position with newcomers, but Jaelyn Duncan would be a hard addition to pass on. He’s got size, length, and athleticism—all the makings of an impact starter on the offensive line.”

If the name Jaelyn Duncan sounds familiar to you, you likely may have seen my most recent scouting spotlight on the 6’6, 330lb redshirt senior from Maryland that I posted just the other day, highlighting his performance against Buffalo. Crabbs is right in saying that Duncan has all the measurables you look for in a prototypical tackle prospect, having the sturdy frame to anchor in against power rushers as well as the arm length and footwork to step the depth of the pocket and mirror more nimble speed rushers in pass protection.

From my first initial viewing of Duncan, he can stand to play with a more consistent aggressive demeanor and better awareness in terms of picking up blocks in space, but the tools are all there for him to develop into a franchise-caliber LT at the next level. He will have to show he is up for the challenge against better competition in the Big Ten, but seeing as the offensive line in Pittsburgh needs to be injected with more talent at multiple spots, Duncan is a logical choice that the Steelers should pay close attention to this fall.