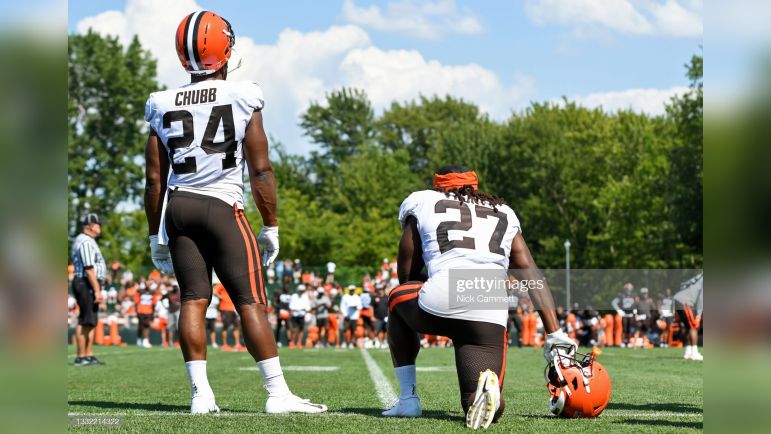 Stop the Cleveland Browns running game. A sentence Pittsburgh Steelers’ fans have been saying for the past couple years and will probably say for the next five more. On a short week, the Steelers will have to find a way to contain running backs Nick Chubb and Kareem Hunt. For defensive coordinator Teryl Austin, it’s as tough a pairing as he’ll see this season.

Talking with reporters Tuesday, Austin broke down the Browns’ run game and the Steelers need to stop it.

“This week is a test,” Austin said. “Because these two guys are as good as anybody you’ll see. And their line works well together. They might get Conklin back so they’ll be fully healthy. So we’ll have a big challenge ahead of us.”

Through the first two weeks, the Browns lead the NFL with over 200 yards rushing per game while ranking fourth at a 5.3 yards per carry clip. Cleveland ran for 217 in their opening win against the Carolina Panthers. Nick Chubb did the heavy lifting, rushing for 141 yards while Hunt finished off drives, scoring once on the ground and once through the air. In Sunday’s loss to the Jets, the Browns still ran for 184 yards with Chubb finding the end zone three times, the second such game of his career. Carries between the two were split almost evenly, Chubb with 17 and Hunt 13.

Chubb is arguably the most talented runner in football with an incredible combination of size, power, and burst, making him difficult to bring down once he gets into open grass. Hunt offers more versatility, the ability to move him around the formation and get him more involved in the pass game.

They’ll run behind a strong run-blocking line with two excellent guards in Wyatt Teller and Joel Bitonio and a defined zone scheme. As Austin mentioned, their front five may be getting healthier with veteran RT Jack Conklin possibly returning. If not, James Hudson will see another start. A second-year player, his performance has improved after being dusted by T.J. Watt a year ago and of course, Watt won’t be available for this contest.

Two games into the year and the Steelers are allowing 4.0 yards per carry, tied for the tenth-best mark in football. A clear and obvious improvement over last year, though Pittsburgh’s run defense struggled more in Week Two without Watt than in Week One with him. A poor showing by this run defense Thursday could knock Pittsburgh into the bottom-third of the league.

To the Steelers’ credit, even in an otherwise terrible 2021 season, they found a way to contain the Browns’ run game in both their matchups, holding them under 100 yards in each game. Doing so again would be a great start to pulling out a victory over the Browns.