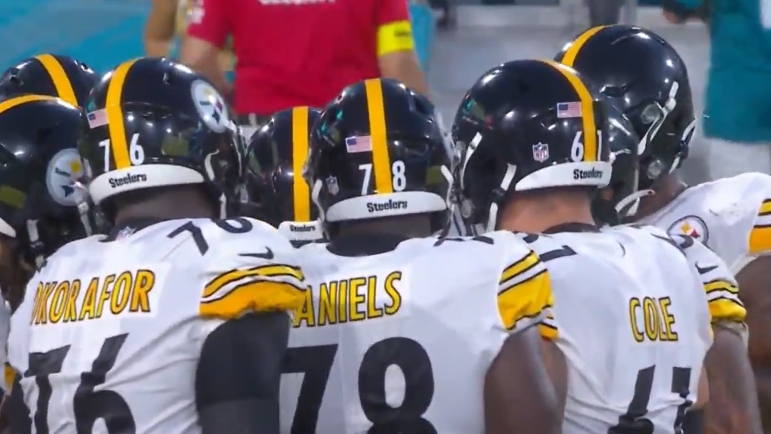 During the summer, the Pittsburgh Steelers’ offense line was the elephant in the room. Now, it’s the lion – the king of the jungle, the one unit of the Steelers’ offense that has you saying, “Hey, they’re doing alright.” Speaking to reporters Monday, OG Kevin Dotson explained the reason for the front five’s fast turnaround.

“Our pass blocking hasn’t been bad at all.” he said via The Trib’s Chris Adamski. “I see us being smarter in our calls. Smarter in our being able to find out what the defense is doing. Being bale to make adjustments to things we once saw a mistake on. A mistake on play five, we’ll come back and do it on play eight to be able to win.”

Kevin Dotson on the progress the Steelers offensive line is making pic.twitter.com/G7sNdZBYgL

Pittsburgh’s line play has been a pleasant surprise, improving its run blocking on a weekly basis and giving Najee Harris and this ground game some room. We’ll have a video breakdown of the line’s push tomorrow for the site. Pass protection has been just as strong. Through three games, we haven’t charged a single sack allowed to the Steelers’ offensive line. All the ones taken so far have fallen on the quarterback, coaches, or running back. Pittsburgh’s faced tough fronts, too, in the Cincinnati Bengals, New England Patriots, and Cleveland Browns, teams with either a deep rotation of pass rushers, sound scheme, or both.

For comparison’s sake, in 2021, we charged the offensive line for 23.5 sacks. It’s still early and this line, of course, will give up sacks, but they’re in a far better place than a year ago when LT Dan Moore Jr. gave up 7.5. Most of that came over the first ten weeks of the season and since then, he’s played well and is much-improved following a bumpy summer, far more comfortable with using independent hands than he was in the preseason.

To Dotson’s point, the Steelers’ line has seemed to communicate well, picking up stunts with relative ease. There have been a handful of blown assignments, but the team has done well passing twists and games off. Watch James Daniels and Chukwuma Okorafor did it here Thursday. It’s about as clean as it gets.

The line figures to still have ebb and flow throughout the season and there’s bound to be a game or two in which they struggle and become the driving reason for a loss.

Their progress and current success is an exercise in patience. New OL Pat Meyer has worked well with this group and the issues they had during camp stemmed from the newness of another new coach teaching his style and needing time for players to adapt. Perhaps Meyer has slightly tweaked and relaxed his teachings, there’s small things on tape I saw early in the summer I don’t see as much of anymore, like guards being so quick to help tackles when the center slides their way, but the unit has surpassed expectations. Of course, expectations were incredibly low heading into the year and that plays a role in the general consensus of how this group has done, too.