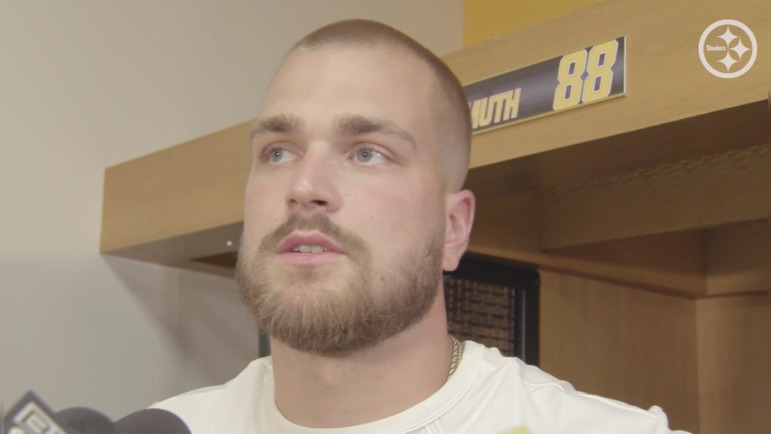 Another week passes by and the Pittsburgh Steelers continue to struggle stretching the field vertically in the passing game after taking a tough loss to the New England Patriots at home.

When asked how the offense plays to stretch the field more going forward after a subpar performance in that area in this game, Freiermuth pointed to the offense having faith in one another to get the job done, particularly with the quarterback.

“I think we just have to trust our quarterback and trust our guys to go down there and make plays,” Freiermuth said to the media following the game in the locker room on video from Steelers.com. “It’s just pretty simple like that. Just trust each other.”

Freiermuth and Trubisky connected for four catches on seven targets for 22 yards and a TD, Pittsburgh’s only TD of the game. Overall, the running game was better than last week against the Cincinnati Bengals, but Trubisky failed to take a step forward as a passer in this one. He completed only 5.1 yards per attempt for 168 yards, throwing a TD and an INT on a tipped pass by LB Mack Wilson that fell straight into the hands of DB Jalen Mills.

Trubisky’s longest completion of the afternoon went to George Pickens on a 22-yard completion along the right sideline. After that completion, only Diontae Johnson posted a completion over 15 yards. The offense has resembled the same dink-and-dunk passing game that became infamous with Ben Roethlisberger in the last couple years of his career. Trubisky has struggled in the past with stretching the field, but he even came out after the game and mentioned that offense needs to call more concepts to get completions to receivers over the middle of the field and down the seam.

Looking at Trubisky’s passing chart from this performance, it’s pretty telling that there is a clear lack of attempts to the middle of the field as well as vertically down the field. Part of the blame can be put on Trubisky for either not finding the open receiver or holding on to the football too long, but part of the blame also falls on OC Matt Canada and the scheme being run with a clear lack of attacking the defense down the field. Either way, something must be changed as Pittsburgh prepares to face off against the Cleveland Browns on a short week this Thursday night.