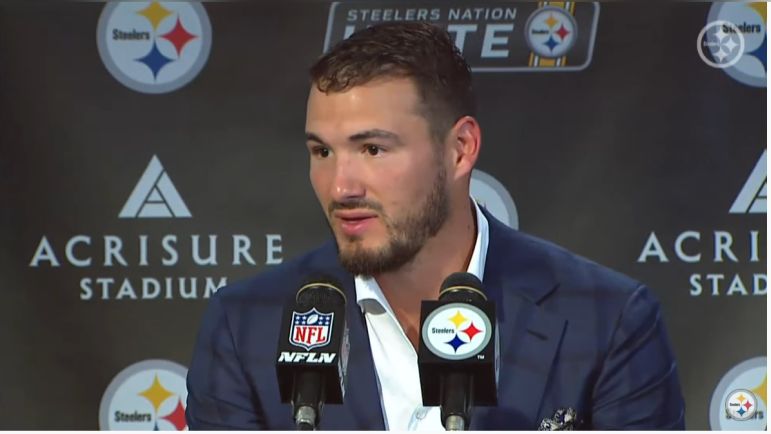 Last week, Matt Canada said the Pittsburgh Steelers need to throw the ball to the middle of the field more, suggesting quarterbacks need to work that area of the field more often. Exiting Sunday’s loss to the New England Patriots, QB Mitch Trubisky is looking to his offensive coordinator to call more plays between the numbers.

Speaking to reporters following Sunday’s 17-14 loss to the New England Patriots, Trubisky was asked how the middle of the field can be used more often.

“Call concepts to get receivers there,” he said via the team’s YouTube channel.

That’s a spicy meatball. How much of a shot that is at Matt Canada versus how much of it is the reality of the situation is up to you. But it’s certainly been a hot-button issue for years in Pittsburgh, with results unchanging in the first two weeks of the post-Ben Roethlisberger era. And Trubisky’s comments are likely going to draw plenty of play in the city as the Steelers’ offense looks as lifeless as last season.

Trubisky finished the day a paltry 21/33 for 168 yards, one touchdown, and one interception. His offense has scored two touchdowns in two games and scored just 30 points over the first two weeks, a number that might’ve worked in 1972, but not 2022.

He went into more detail about the reasons for using the sidelines more often.

Single high, or middle of the field closed, makes it harder to throw between the numbers and invites for outside shots with 1v1 matchups on the perimeter. That’s Cover 1 or Cover 3. Trubisky confirmed he saw a lot of single-high defense today, as the Patriots’ defense won with steady defense and sticky coverage. On first watch, it felt like there were at least chances for Trubisky to throw underneath over the middle, missing a frustrated Diontae Johnson late in the game on a third down incompletion to Najee Harris while also having a hard time connecting with Pat Freiermuth. One of his middle of the field throws was a poor read and led to his first INT of the season.

Regardless of reasons, the Steelers’ offense will have to find ways to use the entire width of the field going forward. Pittsburgh’s offense already feels limited as it is and having a small menu of plays that might work isn’t going to be good enough for this offense to consistently put points on the board.