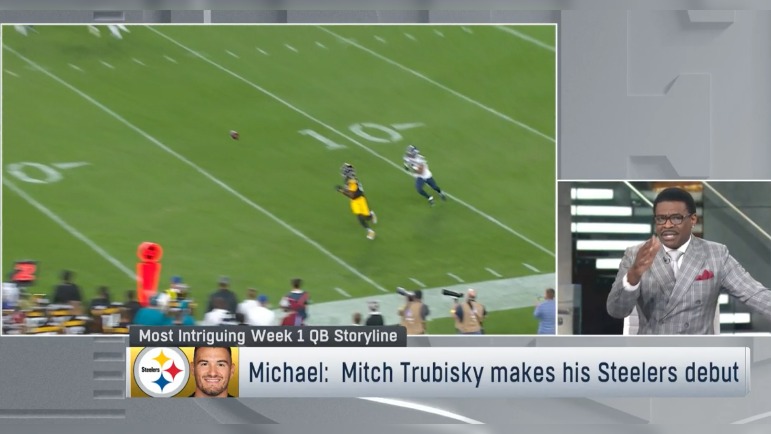 On Tuesday night, the cast of Rich Eisen, Michael Irvin, Kurt Warner, and Steve Mariucci aired live on NFL Network’s NFL GameDay Season Preview prior to the regular season kickoff between the Buffalo Bills and the Los Angeles Rams. The crew talked about various superlatives heading into the 2022 season, including Super Bowl favorites, MVP candidates, and teams/players that could surprise everyone like the Cincinnati Bengals did last season.

When the analysts started talking about the most intriguing Week 1 QB storyline, Irvin broke down his thoughts on the current QB situation in Pittsburgh, acknowledged Mitch Trubisky will get the start, having been named a team captain and the starting QB by Mike Tomlin. However, he followed that statement saying it may not be long until we see Pittsburgh’s first-round rookie QB get thrust into the fold the second Trubisky slips up.

“Mitch Trubisky will get the start and boy, that young boy Kenny Pickett right there from Pittsburgh, hometown who had a great preseason.” Irvin said on the NFL GameDay Season Preview which aired on NFL Network. “Trust me, people will be watching. Any mistake by Trubisky, they going to be ready to hold a Pickett line.”

Trubisky has been the favorite for the starting QB job in Pittsburgh since he arrived in free agency this spring, having run with the first team offense during OTAs, mandatory minicamp, training camp, and starting all three preseason games. Mike Tomlin hasn’t shown inclination that he would move off the team’s initial decision to start Pickett, who had a fine preseason himself, completing 29-of-36 pass attempts for 261 yards and three TD with no INTs.

The belief is that Trubisky will be the starter until he struggles or gets injured, then Pickett will take over as the starting QB. However, the question remains how much Trubisky must struggle to get yanked to put in the rookie. While Irvin is right that fans will be calling for Pickett the second that Trubisky throws an INT or loses a game, it’s more likely that Pittsburgh will stick by him given Tomlin’s history of not trying to ride the highs and lows from week-to-week.

We will have to see how Trubisky fares in his first exposure as the starting QB for the Pittsburgh Steelers in the regular season, but in all likelihood, we shouldn’t expect a quick change at QB unless something goes dreadfully wrong.

3, 2, 1? Countdown To Kenny Pickett Era May Take Longer Than You Think