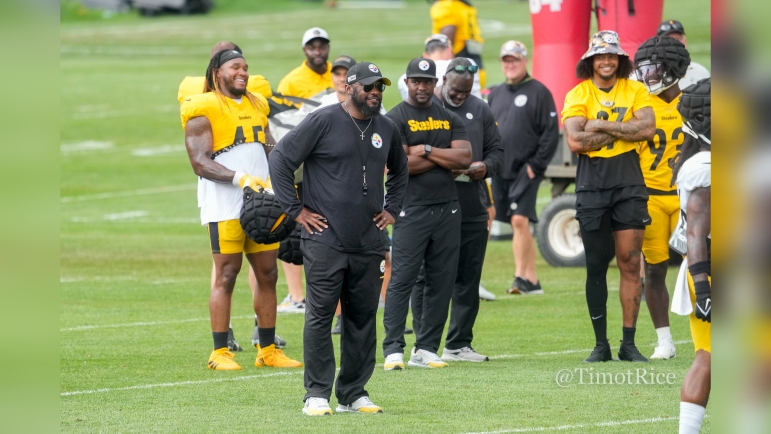 Mike Tomlin cleared the air yesterday. Our bad, we goofed, Kenny Pickett is the #2 quarterback on the team. Not a great way to kick off the season but hey, it’s been awhile since the Pittsburgh Steelers have had to fool with their quarterback depth chart. Making Pickett Mitch Trubisky’s backup is the right move. He’s earned that spot. And though he’s just one snap away from the field, barring an injury, expect Tomlin to exercise more patience when it comes to Trubisky than you may think or like.

There’s no question the first moment Trubisky falters, there’ll be calls for Pickett. The first interception, the first loss, the first signs of struggle. The narrative will be resounding: Trubisky’s unchanged, the same bust he was in Chicago, let’s see what the rookie to do. And that instinct might not be wrong. If you’ve listened to me, I’m in favor of starting Pickett out of the gate. He’s ready to sink or swim. He’s checked all the boxes. But don’t expect Tomlin to have a short leash when it comes to Trubisky.

This whole offseason has been about instilling confidence in Trubisky. In him being the guy. Framed as a quarterback battle, it was always Trubisky’s job to lose. Back in the spring, and Cam Heyward directly said this, Tomlin announced that Trubisky was the team’s de facto starter. Pittsburgh’s done everything they can to offer him a firm foundation, something he didn’t get in Chicago’s unending chaos. He’s gotten nearly all of the first-team reps and has gotten the backing of team leaders like Cam Heyward in addition to being named a permanent team captain for the first time in his NFL career.

A veteran head coach like Tomlin is resistant to the inevitable calls if the Steelers don’t get off to a hot start. His whole mindset is about staying the course, steadying the ship, and he doesn’t want a repeat of 2019 when the team played quarterback roulette. Could Tomlin eventually make a change? Sure. He’s resistant but not inflexible. But this was a Steelers’ team that went 1-3 last season and climbed out of the hole. Tomlin’s not going to make a knee-jerk change Week 2, Week 3, probably not by Week 5. Expect some “Trubisky is our quarterback” from him after a rough performance. Tomlin’s going to go as far as he can with Trubisky before making a change. Who knows? That could be as long as Week 15.

Kenny Pickett is the future. He will eventually start and his odds of playing this year are good. All it’d take is one injury for that door to swing open just as it did for Ben Roethlisberger in 2004. But as long as Trubisky’s upright, Tomlin’s going to show plenty of faith in him. Probably too much faith. He’ll be wiling to make a change but he’ll be the last in Pittsburgh to think so. And ultimately, his vote is the only one that matters.