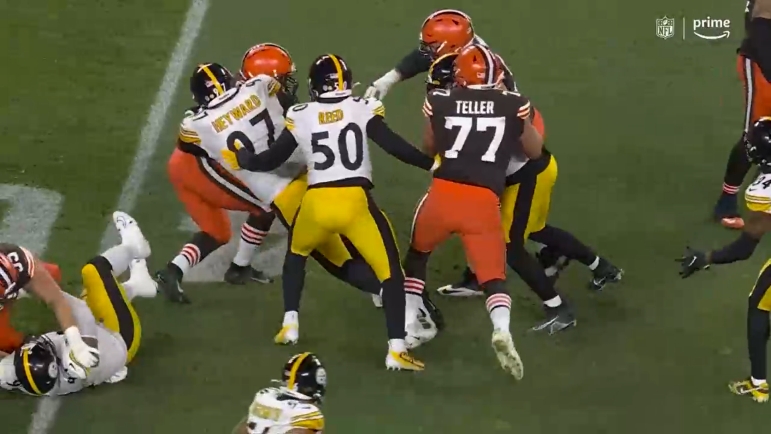 Through three games, the Pittsburgh Steelers’ defense has done all that it can to not only keep the Steelers in games, but attempt to try win them outright. That hasn’t quite worked out the last two weeks, as the Steelers’ defense has been left on the field far too long due to three-and-outs from the Steelers’ offense, resulting in a depleted defensive unit, allowing the New England Patriots and Cleveland Browns to run the clock out with consistent rushing attacks.

Of course, it doesn’t hurt opposing teams that star outside linebacker and reigning NFL Defensive Player of the Year T.J. Watt isn’t out there due to a pectoral injury. The absence of the elite defensive playmaker has sapped the Steelers of some explosiveness defensively, causing some struggles to get to the quarterback and force those game-changing plays.

Speaking with reporters Wednesday, according to Steelers.com’s Teresa Varley, Saleh praised the Steelers’ defense, calling it a “very efficient” unit based on a down-in, down-out basis, adding that due to the unit’s experience on the field together and the amount of years together in the coaching staff, the Steelers can pull from anything on the defensive side of the football to try and scheme up ways to win.

“They have guys who are every bit as capable. I think they are doing a great job of getting after the quarterback. They have (Cameron) Heyward, (Larry) Ogunjobi. They are still able to apply pressure and do the things they need to do to affect the quarterback,” Saleh stated to reporters, according to Steelers.com, regarding Pittsburgh’s ability to get after the quarterback, even without Watt in the lineup. “They push the pocket. They play very hard. They’re relentless in their pursuit for the quarterback. They do a really good job with their coverage system. They give the d-line a chance to go get the quarterback. It’s a very experienced team. They’ve played together for a very, very long time. They’re very efficient in what they do from a down-in, down-out basis.

“So, it’s going to be a great challenge for everyone, not just the quarterback,” Saleh added, according to Steelers.com. “They’ve got such an inventory. The amount of years the group has been together is pretty significant. They can pull from anything. It’s a really cool system and the players execute it to a high level.”

Coach Saleh on the return of QB Zach Wilson to the lineup. pic.twitter.com/t650s5CywV

On paper, it’s a very functional system that maximizes talents on the defensive side of the football. Having longtime experienced NFL coaches in head coach Mike Tomlin, defensive coordinator Teryl Austin, defensive assistant Brian Flores, and guys like linebackers coach Jerry Olsavsky and defensive line coach Karl Dunbar gives the Steelers a real leg up from the coaching perspective.

In Week 1, that showed as the Steelers really put the clamps on the Cincinnati Bengals on the road, winning in overtime in a heroic effort from a defense that recorded seven sacks, forced five turnovers, and even turned in a pick-six of its own. Since then though, the splash hasn’t quite been there, from a turnover and sack perspective.

Add in the offense’s inability to sustain drives putting the defense right back on the field, it’s been a recipe for disaster, which has led to two straight losses in frustrating fashion. Saleh knows how talented the Steelers are on the defensive side of the football, and he knows it will be a massive test for second-year quarterback Zach Wilson — making his return from injury  on Sunday, not to mention the Jets’ offense as a whole.