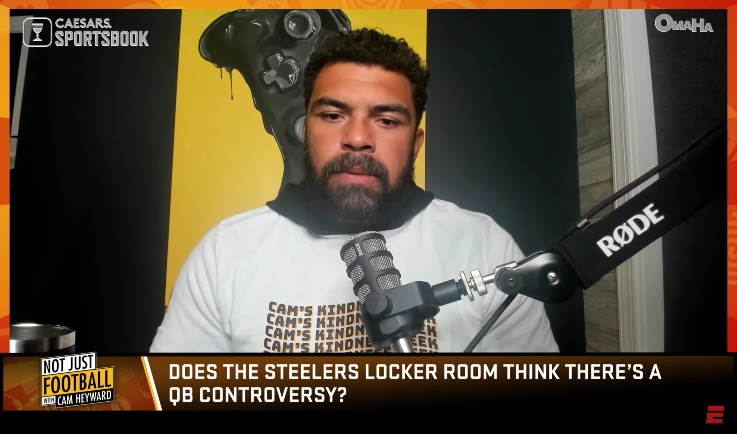 On his Not Just Football podcast, Steelers defensive lineman Cameron Heyward said that Mitch Trubisky isn’t to blame for the team’s start, and he believes the starting quarterback has done enough to put the team in a position to win.

“We’re just ticked that we lost. We lost two in a row. I don’t think we need to put all the pressure on the quarterback. We were winning at half. In my book, when you’re winning at half, you scored enough points,” Heyward said on the podcast via YouTube. “The quarterback put us in a position to win. What are we talking about? We knew there were going to be hurdles with our offense, and I think we’ve gotten better and better,” he continued. “I think Mitch has done an admirable job.”

Heyward’s a veteran and he obviously doesn’t want to stir things up in the locker room. But having 14 points really isn’t enough to win in the NFL on a week-to-week basis. Yes, the Steelers were leading at the half, but it was a one-point lead and it’s not realistic to expect the defense to shut a team out for a whole half, especially one with the running back tandem that Cleveland has. Trubisky wasn’t horrible last Thursday night, and he was a lot better than he was the previous Sunday in the Steelers’ Week 2 loss to the Patriots. But he still wasn’t good enough, and for the Steelers to be competitive this year, they need better play out of him.

I don’t think Kenny Pickett is the answer yet just because of how this offense is currently being schemed. With the structure of the offense, I don’t know if Pickett will have the opportunity to do anything more than Trubisky is currently. I’m not sure he’s going to come in and the offense drastically improves, especially with their upcoming schedule. It’s a good sign that the locker room has Trubisky’s back, though. Nothing can sink a team faster than friction and poor chemistry, and at least publicly, players are throwing their support behind Trubisky. Heyward is one of the most influential voices on the team, so for him to come out and say that Trubisky did enough and put them in a position to win is important.

Trubisky has to be better but he’s not alone. The run defense has to be better, receivers have to hold onto the ball and the play-calling has to be less stale and predictable. Right now, the Steelers don’t look like a very good football team, and if that doesn’t change soon, they’ll have the record to show for it.