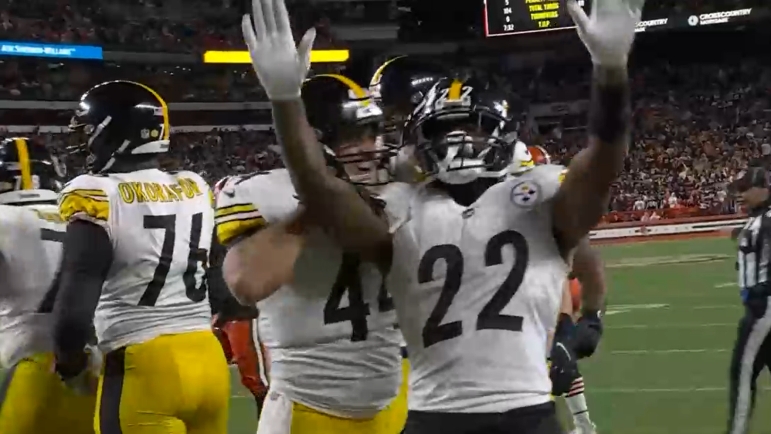 The Pittsburgh Steelers lost a divisional matchup with the Cleveland Browns last Thursday night in Cleveland by a score of 29-17. While the offense again seemed to let the team down in this one, we did experience some life on this side of the football in comparison to Pittsburgh’s first two games of the season. Pittsburgh put together back-to-back 75-yard drives in the first haft the culminated in TDs, giving the Steelers the lead heading into the intermission. However, once the team took the field in the second half, the managed to put up only a field goal in the final minutes of the game as the offense again got stuck in neutral.

Going back through the tape and referring to the wonderful charting of the Steelers’ offense done by Steelers Depot’s very own Tom Mead, there is a consistent tread that exists when Pittsburgh effectively moves the football: a no huddle offense.

When Pittsburgh’s offense was rolling in the first half, they were running tempo to keep the defense on its heels which opened both the passing game and the running game. As Pittsburgh got the ball near the end of the first quarter, they started going no huddle at the 1:52-mark with a handoff to Jaylen Warren off the left guard to PIT 46 for a gain of seven yards.

The very next play as Pittsburgh ran the hurry up, Mitch Trubisky fires a pass deep down the right to George Pickens who makes potentially the catch of the year at the CLE 18 for a 36-yard gain.

Pittsburgh keeps the pace up with the no huddle after the explosive pass play, handing the ball off to Warren of the left guard as he picks up six yards on the ground, taking the ball to the CLE 12-yard line.

The Steelers go to Warren again the very next play after going no huddle as the back takes the carry off the right tackle to the CLE five-yard line for a pickup of seven to end the first quarter.

After the team got back on the field for the start of the second quarter, Najee Harris takes the carry outside the left tackle for the TD

On Pittsburgh’s second TD drive of the game which came on the very next possession, the Steelers ran the tempo offense on three separate occasions. Two of those plays you see below as the offense gets into the red zone and Harris picks up gains of ten yards on the first carry and four yards on the next carry before Trubisky calls his own number on the keep and dives into the end zone himself for the score.

Once Pittsburgh got back from the half, they slowed things down having the lead and possession of the football to start the third quarter. The use of tempo dropped and subsequently, so did the offensive output. Mason Cole along with other players questioned why the use of tempo dropped off in the second half when it worked so well to start the game as Pittsburgh fell behind to Cleveland and needed to speed things up once again to try and jumpstart the offense late in the fourth quarter.

With 3:13 left in the game, Mitch Trubisky takes the snap and throws the pass short left to Diontae Johnson who  gets out of bounds at the PIT 33 for 13 yards to start the drive.

The very next play in the no huddle offense, Trubisky fires the pass deep down the seam to Pat Freiermuth who makes the catch in traffic at the CLE 41 for a gain of 26 yards.

Pittsburgh opts to go back to the well on the next play while running tempo as Trubisky finds Freiermuth again for the chuck gain, taking the ball to the CLE 26 for a gain of 15 yards. Pittsburgh would end up settling for a field goal after failing to convert on third down of the drive.

Pittsburgh’s offense ran nine plays with no huddle in the first half of Thursday night’s game against the Browns, and eight of those nine offensive plays came on Pittsburgh’s two TD drives. For context, Pittsburgh ran seven plays in the no huddle offense in the second half, but four of those play came on the team’s final drive when they were down two scores, needing to try and score quickly to make it a one-possession game and try to get the ball back. Pittsburgh had three consecutive three-and-outs in the second half as they tried to slow things down, nursing a mere one-point lead at the half.

While it was in their interests to slow the game down, chew up some clock, and try and get out of Cleveland with a narrow victory, their plan backfield as the offense struggled to get anything going outside of the up-tempo offense that had worked so well in the first half of action. It’s understandable that Pittsburgh’s offense may not be able to go no huddle for the entire game when factoring fatigue as well as the lack of time you give the defense to rest up on the sideline, but when the unit fails to sustain any offensive drives outside of using tempo which puts the defense back onto the field anyway, perhaps stay in the no huddle offense a majority of the time would be a wise idea.

The no huddle offense has worked well for the Steelers in the past as Ben Roethlisberger was a wizard in the two-minute drill. He would seemingly spark a stagnant offense that needed to move the ball quickly down the field and put points on the board when the offense failed to do so for most of the game. Plenty of defensive minded coaches have also expressed their disdain for the no huddle offense and the problems it presents in terms of substitutions and making the correct checks to get spot prior to the play. Alabama HC Nick Saban went so far as to say that offenses show never huddle last season when he appeared on Monday Night Football with Peyton and Eli Manning.

should an offense ever huddle?

Ultimately, something needs to change for the offense to establish some sort of consistency and rhythm going forward. While Mike Tomlin and Matt Canada have said that they need to be selective of when to use tempo in the offense, given the fact that Pittsburgh’s best results the last few years have come in the no huddle offense, it may be wise if Canada and the offense as a whole adopt tempo as a more prominent component of the game plan going forward to help this offense find some traction in 2022.

What are your thoughts on Pittsburgh’s offense this season? Do you see a drastic difference when they run the no huddle offense? Is it plausible for the team to feature more tempo in the game plan moving forward? Please leave your thoughts in the comments section below and thanks again for reading!